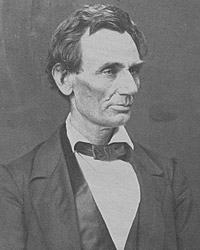 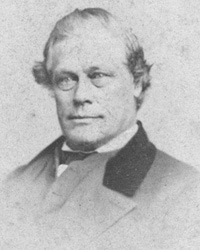 An important cause of conflict among Mr. Lincoln’s friends in 1856 and 1858 was the Republican candidacy for Congress of Owen Lovejoy. Lovejoy was an avowed and impassioned abolitionist – while many of the friends of Mr. Lincoln were much less radical. Although Lovejoy was one of the founding forces in the Illinois Republican party, he alienated many moderates, especially those like Mr. Lincoln who were more politically cautious. But the party needed all its potential allies. Historian William Lee Miller noted that “one had to keep the support of the small but growing group of strongest opponents of slavery, who would be found particularly in the northern part of the state, abolitionists like Lovejoy. David Davis and other of Lincoln’s friends detested Lovejoy and his ilk, but Lincoln was developing a friendly, businesslike collaborative relationship.”1 Miller noted that Mr. Lincoln wrote Lovejoy on August 11, 1855, “Yours of the 7th. was received the day before yesterday. Not even you are more anxious to prevent the extension of slavery than I; and yet the political atmosphere is such, just now, that I fear to do any thing, lest I do wrong.”2

Leonard Swett, a longtime legal colleague of Mr. Lincoln, sought the 1856 congressional nomination and narrowly lost a Republican convention vote to Lovejoy. Mr. Lincoln responded to the vote by writing: “It turned me blind when I first heard Swett was beaten, and Lovejoy nominated; but after much anxious reflection, I really believe it is best to let it stand. This, of course, I wish to be confidential.”3

Another friend of Mr. Lincoln and David Davis – fellow former Whig T. Lyle Dickey – entered the race for Congress, but Judge Davis prevailed on him to withdraw, arguing that he could only ensure the election of a Democrat. Nevertheless, other old line Whigs like Lincoln’s former law partner, John Todd Stuart moved to the Democrats in reaction to Lovejoy’s nomination. Dickey himself moved to the Democratic Party and supported Stephen Douglas over Mr. Lincoln in both 1858 and 1860. The defection hurt. Mr. Lincoln told Henry C. Whitney that “he did not know of any of his friends he felt so badly about losing as Dickey.”4 Historian Michael Burlingame noted that “shortly after hearing of Dickey’s act, [Mr. Lincoln] erupted in anger.”5 Fellow attorney Henry C. Whitney noted that “when Dickey abandoned our political faith in 1858, Lincoln no longer had any faith in him. But Lincoln felt very much grieved when I informed him that Dickey was about to leave us.”6

Mr. Lincoln needed to keep his conservative allies within the Republican Party – along with the abolitionists. It was the widespread view of the conservatives that Lovejoy was neither preferable nor electable. “It was the view of the Eighth Circuit bar, which included Judge Davis, Swett, Lamon, Moore, and Oliver L. Davis, that if Lincoln was to succeed, Lovejoy must not be renominated for Congress” in 1858, wrote Davis biographer Willard L. King. ” Douglas would win the southern portion of the state and Lincoln the northern, with central Illinois casting the deciding vote. To win seats in the state legislature there, a more conservative candidate for Congress than Lovejoy must be chosen. Judge Davis, Swett, and Oliver L. Davis were suggested as acceptable candidates. Lincoln concluded that none of these men could defeat Lovejoy for the nomination but he feared that the Democrats would beguile one of them into running independently.”9

Keeping good relations with Lovejoy and his detractors was a crucial goal. “I have just returned from court in one of the counties of your District, where I had an inside view that few will have who correspond with you; and I feel it rather a duty to say a word to you about it,” Lincoln himself counseled Lovejoy after a visit to McLean County in March 1858: “Your danger has been that democracy would wheedle some Republican to run against you without a nomination, relying mainly on democratic votes. I have seen the strong man who could make the most trouble in that way, and find that they view the thing in the proper light, and will not consent to be used. But they have been urgently tempted by the enemy; and I think it is still the point for you to guard most vigilantly. I think it is not expected that you can be beaten for a nomination; but do not let what I say, as to that, lull you.”10

When Lovejoy’s Republican opponents raised the issue of backing a third candidate in the race, Mr. Lincoln blocked the move, writing Ward Hill Lamon that “it will result in nothing but disaster all round.”11 Even after the election, Mr. Lincoln had to defend not only Lovejoy against Republican attacks but Judge Davis against attacks by Lovejoy’s friends. In a letter to the Chicago Tribune Mr. Lincoln responded to an anonymous attack on Davis:

Judge Davis is my friend. I have known him for many years and think I know his views. I am certain that no plot or movement against Lovejoy’s re-nomination was led on by him, or that he was cognizant to anything of the kind, though he has some friends who were opposed to him, but he is not responsibility for their opinions. That charge that he has no sympathy for the vitalizing principle of Republicanism is based on your own radical and progressive views, as advanced in the editorials of the TRIBUNE.
I believe he did not vote for Lovejoy in 1856; but I do not believe he tried to keep a single other vote from him. That he feigned sickness and lay at his rooms to have voters brought to him and persuaded to vote against Lovejoy, is certainly an untruth, and gains no credence in this community. Indeed it is not one of his characteristics to feign anything. As to the approaching canvass, Judge Davis expects Lovejoy to be nominated, and intends to vote for him, and has so stated without hesitation or reserve. He does not pretend to conceal his preference for another candidate, not himself as insinuated by ‘Fair Play;’ but this is his undoubted right and privilege.
I have good reason to know that on a recent occasion, he expressed his decided disapprobation of a scheme concocted by certain influential persons, to bring out a stump candidate without a nomination, for the purpose of ensuring Lovejoy’s defeat.12

Lincoln’s unity efforts had limited effect – although Davis wrote that he was “much obliged” for Mr. Lincoln’s letter to the Tribune.13 Dickey, alienated by Lovejoy and by Lincoln’s 1858 nominating speech in Springfield, duly defected to Douglas. Dickey even obtained for Senator Douglas the endorsement of John J. Crittenden, an old-line Whig senator from Kentucky, and waited until just before the election to release it to devastating effect on Lincoln’s candidacy. While Dickey defected, Lovejoy eventually turned into one of President Lincoln’s closest supporters in the House of Representatives – and a much less demanding and more loyal friend than those political allies who had been closer to attorney Lincoln in the 1850s.

But whatever his feelings about Dickey’s defection, Mr. Lincoln didn’t let it show in public. Dickey later recalled: “The first joint debate he held with Douglas was at Ottawa…though I was there on the platform at Ottawa as one of the avowed supporters of Douglas – yet when the meeting was over – along in the evening about twilight – he came up to my house (I was then living at Ottawa) and made my house his headquarters.”14

Lovejoy’s value was gradually recognized in the Republican Party. “If you could prevail upon Lovejoy to come down here and make a few calm, dispassionate, discreet speeches, placing himself upon your ground, it would do more to conciliate the people of this section to Republicanism, than anything else,” Gustave Koerner wrote Mr. Lincoln from Indiana in August 1860. “They would ask themselves: ‘Is that the wolf we have heard so much of?’ The effect, I have no doubt, would be great. I submit the thing to your consideration and will talk to the Central Comm. of this State about it. Of course, you must be sure that Lovejoy would act very discreetly.”15