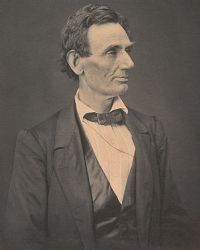 The dissolution of the Whig Party, the growth of the Know Nothing movement and the birth of the Republican Party caused Mr. Lincoln many difficulties with his friends during the mid-1850s. Some of Mr. Lincoln’s former Whig colleagues – like T. Lyle Dickey, Usher F. Linder, Benjamin S. Edwards, James W. Singleton, and John Todd Stuart – switched their allegiance to the Democratic Party. “Of particular satisfaction to [Senator Stephen A.] Douglas was Stuart’s support, not only because Stuart had been a law partner of Lincoln’s, but also because he had been Douglas’ opponent in the hard-fought congressional race twenty years before,” wrote Douglas biographer Robert W. Johannsen.1

Mr. Lincoln heard and read reports in 1858 that Republican Congressman Elihu Washburne was pushing Illinois Republicans to back Senator Douglas for reelection. Lincoln sent Washburne a veiled warning; he wrote Washburne that he was sure the report was “based upon some mistake, misconstruction of language, or the like. Several of our friends were down from Chicago, and they had something of the same story amongst them, some half suspecting that you were inclined to favor Douglas, and others thinking there was an effort to wrong you. Such is my opinion now, and I hope you will have no concern about it. I have written this because [the Chicago Tribune’s] Charley Wilson told me he was writing you, and because I expect Dr. [Charles] Ray, (who was a little excited about the matter) has also written you; and because I think, I perhaps, have taken a calmer view of the thing than they may have done. I am satisfied you have done no wrong, and nobody has intended any wrong to you.” Using his letter to push a potentially loose Republican back into line, Mr. Lincoln closed the letter: ” Your friend as ever.”2

Eventually, the anti-Nebraska Democrats like Trumbull, John M. Palmer and Norman Judd who had opposed Mr. Lincoln in 1855 would unite behind him in the 1860 presidential contest. Douglas biographer Gerald M. Capers wrote that “many Democratic leaders in the state deserted [Douglas], either because of their own feelings about the Nebraska Act or because they thought he had committed a fatal strategic error in supporting it. When he insisted upon unqualified acceptance of the act as a test of party loyalty, many of his friends bolted or became disaffected: editor ‘Long John’ Wentworth, Lyman Trumbull, John M. Palmer, and even his faithful lieutenant, [John A.] McClernand.”3 The differences between the old line Whigs and Free Soil Democrats continued into patronage choices they suggested for President Lincoln in 1861.

While Mr. Lincoln was strengthening many friendships during the 1850s, Douglas was losing some friends and gaining others. The three defecting Democratic State Senators from 1855 all became politically influential in Illinois – Trumbull a three-term Senator; Palmer a Union General, Governor, and Senator; and Judd a Republican State Chairman and Congressman who nearly made it into Mr. Lincoln’s cabinet.

Douglas meanwhile placed John Calhoun, a longtime Illinois ally who had once hired Mr. Lincoln as a deputy surveyor, into Kansas territorial politics. At first, Calhoun acted as a moderating influence. But, noted Douglas biographer Capers, “John Calhoun, territorial surveyor-general, through control of the legislature blocked both governors’ efforts towards peace and forced their resignations. Originally an unofficial agent of Douglas instructed to work for a compromise, Calhoun betrayed his chief to promote his own financial interests. He seems to have done so largely by the secret support of the prosouthern clique in Buchanan’s cabinet determined to make Kansas a slave state. To its wishes he yielded, and in turn this clique bent the President at will.”4 Calhoun’s actions contributed to denying Kansas residents a vote on slavery and to Douglas’s break with the Buchanan Administration and thus the weakening of the Senator’s political position in Illinois.

“When Douglas confronted Calhoun with the evidence of the frauds at the Douglas home in Washington, Calhoun turned pale and left the house,” wrote Paul Simon, who served as Illinois’ senator in the late 20th century. “Calhoun’s fraud had become a national scandal. But more important that, Calhoun had been instrumental in splitting the Democratic party into Northern and Southern wings.”5 And in so doing, he has helped doom Douglas’ long-range presidential prospects. (Mr. Lincoln had his own transplanted Illinois problem in Kansas, Mark Delahay, but Delahay was never in a political position to do so much mischief as Calhoun.)

But Mr. Lincoln also lost old-line Whig friends, whom the Republican Party in central Illinois desperately needed to attract. So did James H. Matheny, an attorney with whom Mr. Lincoln had also been associated in politics, converted to Know-Nothings. Usher F. Linder also moved to the Douglas side of Illinois politics. So had Mr. Lincoln’s former law partner, John T. Stuart. Even Joseph Gillespie expressed his annoyance with Republican factionalism: “I am tired of being dragooned by some half dozen men who are determined to either rule or ruin. I am out of all temper with, and have no faith in the honesty of, men who insist that ten Whigs shall go with one Democrat because they cannot in conscience vote for a Whig. Though I am well satisfied with Trumbull, yet his five particular friends who would rather see the country go to the Devil than to vote for a Whig are not at all to my taste. I have made up my mind that henceforth I can be as reckless as they are, and, so help me God, they shall find out that I am one as well as either of them.”6 Only Mr. Lincoln’s 1858 campaign for the Senate brought Gillespie into the Republican Party as a candidate for the legislature. It brought Matheny back as well.

Mr. Lincoln himself declined to be a candidate for Governor in 1856 – realizing his friends could better work to coalesce behind William Bissell. He told a meeting of Republican editors that “The Kansas-Nebraska bill has disgusted thousands of Illinois Democrats who will now vote with us if we only make nominations to suit them. If you place my name at the head of the ticket the Trumbulls, Cooks, Judds, and Palmers and their following will say it is nothing but the revival of the old Whig Party, and they will continue to vote as heretofore, but if you nominate an anti-slavery extension Democrats like Colonel W.N. Bissell, we can redeem Illinois,” recalled journalist Thomas Pickett, who attended the meeting.7

But Mr. Lincoln did briefly become a candidate for one post in 1856. Mr. Lincoln’s friends in the new Republican Party followed up on Mr. Lincoln’s electrifying speech to the Bloomington Convention by presenting his name as a nominee in Philadelphia for the Republican nomination for vice president. “One of the Illinois delegation was Colonel William B. Archer, who had been in the Legislature when Lincoln was the Whig leader in the House,” wrote Lincoln biographer Albert Beveridge. “Few men in the State had been and were stronger friends of Lincoln than he. Archer was an old line Whig and a Know-Nothing, and had recently withdrawn as the ‘American’ nominee for Governor and thrown his lot with the new party. Disgusted and angry over [Supreme Court Justice John] McLean’s defeat, he resolved to nominate Lincoln for Vice President ‘regardless [of] whom they might name.’ So he hastened to the Girard House where the Illinois delegation stopped, saw Trumbull, Palmer, Judd, and the other delegates.”

The delegation went to work trying to line delegates willing to buck frontrunner William Dayton of New Jersey. Archer gave the nominating speech in which he emphasized that Lincoln’s presence on the ticket would make Illinois “safe” for Republicans. John Palmer, as an old line Democrat, said Mr. Lincoln would add 10,000 votes for the Republicans in Illinois. But Dayton was too strong and polled more than twice as many votes as Mr. Lincoln for the vice presidential nomination.8

Throughout the 1856 presidential campaign, Mr. Lincoln worked hard to attract such Whigs to the Republican banner and away from the American Party candidacy of Millard Fillmore. Mr. Lincoln spoke frequently but could not correspond as much as he wanted. “He wrote personal letters to Whig friends, striving to prove that the race was between [John C.] Fremont and [James] Buchanan, and that a vote for Fillmore would help the Democratic candidate,” wrote biographer Albert Beveridge. Mr. Lincoln even carefully printed a “confidential” letter for many friends; they laughed at Mr. Lincoln’s expense when they realized that they had received duplicate “confidential letters.9