Kansas-Nebraska and the Senate 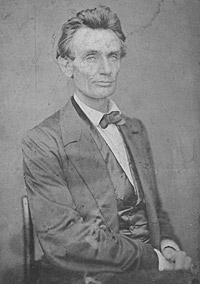 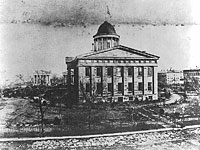 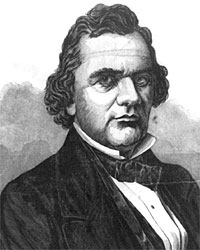 Mr. Lincoln’s friends had their own political pasts, and their ambitions and those pasts were often in conflict. Mr. Lincoln’s legal and political allies could unite behind him – as they did later in 1858 and 1860 – but behind the scenes, their ambitions and egos clashed with each other and sometimes with Mr. Lincoln himself. A good deal of the conflict could be traced to the election of Lyman Trumbull to the Senate in 1855. Mr. Lincoln was a reluctant candidate for the State Legislature in that election, moved by a desire to help his friend Congressman Richard Yates win reelection in the Springfield area.

But Mr. Lincoln had a forceful opponent to his candidacy at home, according to Dr. William Jayne who was Trumbull’s brother-in-law. “I took the names of Judge [Stephen] Logan & Abrm Lincoln to the Sangamon Journal Office and had them published” as candidates for the House of Representatives. However, “Mrs. Lincoln saw Francis [Simeon] the Editor and had Lincolns name taken out. Lincoln was absent. When L. came home I went to see him in order to get him to consent to run. This was at his house. He was then the saddest man I Ever Saw – the gloomiest: he walked up and down the floor – almost crying and to all my persuasions to let his name stand in the papers – he said ‘No – I can’t – you don’t Know all – I Say you don’t begin to Know one half and that’s Enough.” Nevertheless, Jayne put his name back on the list at the Sangamon Journal.1 Mr. Lincoln and Logan, his former law partner, were elected. Mr. Lincoln resigned since a new clause in the State Constitution would have prevented him from being a candidate for the U.S. Senate – a goal in which he was “warmly encouraged” by his wife, according to William Herndon.2

Mr. Lincoln moved quickly to mobilize his friends in the days after the legislative elections. “During the anxious moments that intervened between the general election and the assembling of the Legislature he slept, like Napoleon, with one eye open,” wrote law partner William Herndon.3 In a typical letter to potential supporters, Mr. Lincoln wrote Aurora merchant Charles Hoyt: “Some friends here are really for me, for the U.S. Senate, and I should be grateful if you could make a mark for me among your members. Please write me at all events giving me the name, post offices, and ‘political position’ of members round about you.”4

Biographer Albert Beveridge noted that Mr. Lincoln “continued to write friends ‘confidential’ letters asking for support; but when he thought one of them might wish the place, Lincoln, with mingled generosity and deftness, recognized it. ‘You have as just claims to the place as I have,’ he told [Joseph] Gillespie; but if Gillespie would not be a candidate, then ‘I should like to be remembered affectionately by you; and also to have you make a mark for me with the Anti-Nebraska members down your way.’ Does Trumbull intend ‘to make a push’? It will be hard to ‘unite our forces….If I could have your support, my chances would be reasonably good.'”5

In order to defeat the Democratic forces of Senator Stephen Douglas, Senator James Shields and Governor Joel Matteson, Lincoln realized he would have to subsume his own ambitions to the greater good of the coalition against the Nebraska legislation advanced by Douglas. On the first ballot on February 8, 1855, there was a wide field. Some of Mr. Lincoln’s friends nominated others – State Senator Joseph Gillespie nominated Cyrus Edwards and Isaac Arnold nominated William Kellogg. Mr. Lincoln’s former law partner, Stephen Logan, nominated Mr. Lincoln. On the first ballot, Mr. Lincoln held a 45-41 edge over James Shield and Lyman Trumbull had only five votes. Because his votes dropped and those of Trumbull and Matteson rose, Mr. Lincoln finally switched his votes on the tenth ballot to Trumbull in order to stop election of a pro-Nebraska Democrat like Matteson. Logan, “gave up Lincoln with great reluctance,” according to Gillespie. “He begged hard to try him on one or two ballots more, but Mr. Lincoln urged us not to risk it longer. I never saw the latter more earnest and decided. He said he was satisfied that he could not get the support of those five men and it would be unwise to contend any more and incur the risk of electing Matteson.”6

Gillespie recalled that Mr. Lincoln congratulated Trumbull: “Mr. Lincoln did not appear to have any hard feelings towards Trumbull although of course greatly disappointed and mortified at his own want of success.”7 However, Trumbull’s election to the Senate angered many of Lincoln’s friends – including his own wife, who became permanently alienated from longtime intimate Julia Trumbull. “Trumbull is the most selfish man that ever lived & Mr. Lincoln never will see it,” Judge David Davis once contended.8 Mr. Lincoln himself took the defeat with far better grace. Trumbull biographer Ralph J. Roske wrote:

The very evening of the election, there was a reception, according to one version, at the home of Nicholas H. Ridgely, Springfield’s leading banker. The Mattesons, the Lincolns, and the Trumbulls were all invited. Matteson and his wife never appeared. Lyman and Julia Trumbull caused a stir as they beamingly swept into the drawing-room. They were the center of an admiring throng when Abraham and Mary Lincoln entered. Quickly, the hostess remarked that she had been disappointed at Lincoln’s defeat, but rejoiced with him that the Anti-Nebraska principle had triumphed. Gracious in defeat, Lincoln smiled, moved toward Judge Trumbull, saying, ‘Not too disappointed to congratulate my friend Trumbull,’ and shook him warmly by the hand.9

In situations like this Mr. Lincoln knew how to manage his friends for maximum impact. On February 9, 1855, Mr. Lincoln wrote Elihu Washburne, “These [supporters] would never desert me except by my direction; but I became satisfied that if we could prevent Matteson’s election one or two ballots more, we could not possibly do so a single ballot after my friends should begin to return to me from Trumbull. So I determined to strike at once; and accordingly advised my remaining friends to go for him, which they did & elected him on that 10th. ballot.

Mr. Lincoln observed: “Such is the way the thing was done. I think you would have done the same under the circumstances; though Judge Davis, who came down this morning, declares he never would have consented to the 47 men being controlled by the 5.”10 Mr. Lincoln sent a similar explanatory letter to friend Jesse Olds Norton – showing his detailed understanding of the complex dynamics of the situation and the necessity of blocking Governor Matteson’s election:

The day after the election I wrote Washburne the particulars, tolerably fully. Through the untiring efforts of friends, among whom yourself and Washburne were chief, I finally surmounted the difficulty with the extreme Anti-Slavery men, and got all their votes, Lovejoy’s included. Cook, Judd, Palmer and Baker of Alton were the men who never could vote for a whig; and without the votes of two of whom I never could reach the requisite number to make an election. I do not mean that I actually got within two votes of the required number; but I easily enough could have done so, provided I could have assured my friends that two of the above named four would go for me. In this connection it is necessary to bear in mind that your Senator Osgood, together with Don. Morrison, Kinney & Trapp of St Clair had openly gone over to the enemy. It was Govr Matteson’s manoevering that forced upon me and my friends the necessity of surrendering to Trumbull. He made his first successful hit by tampering with Old man Strunk. Strunk was pledged to me, which Matteson knew, but he succeeded in persuading him that I stood no chance of an election, and in getting a pledge from him to go for him as second choice. He next made similar impressions on Hills of DuPage, Parks of your town and Strawn and Day of La Salle – at least we saw strong signs that he had, and they being old democrats, and I an old whig, I could get no sufficient access to them to sound them to the bottom. That Matteson assured the Nebraska democrats, he could get their men after they should have made a respectable show by voting a few ballots for other men, I think there is no doubt; and by holding up to their greedy eyes this amount of capital in our ranks, it was, that he induced the Nebraska men, since Osgood’s and Don’s defection, had control of the Senate; and they refused to pass the resolution for going into the election till three hours before the joint session was to, and did in fact, commence. One of the Nebraska senators has since told me that they only passed the resolution when they did, upon being privately assured by the Governor that he had it all safe. I have omitted to say that is was well understood Baker would vote for Trumbull, but would go over the first eight ballots which you have doubtless seen, when, on the ninth, Matteson had 47 – having every Nebraska man, and the Old man Strunk besides, and wanting but three of an election; and when the looser sort of my friends had gone over to Trumbull, and raised him to 35 and reduced me to 15 it struck me that Hills, Parks Strawn, Day and Baker, or at least some three of them would go over from Trumbull to Matteson & elect him on the tenth ballot, unless they should be kept on T. by seeing my remaining men coming on to him. I accordingly gave the intimation which my friends acted upon, electing T. that ballot. All were taken by surprise, Trumbull quite as much as any one else.
There was no pre-concert about it – in fact I think a pre-concert to that effect could not have been made. The heart of the battle, and imminent danger of Matteson’s election were indispensably necessary to the result. I know that few, if any, of my remaining 15 men would have gone over from me without my direction; and I gave the direction, simultaneously with forming the resolution to do it.11

Although several of Mr. Lincoln’s friends were bitter about the result, he was not. Mr. Lincoln tended to believe the best of people, writing to George W. Dole, G. S. Hubbard and W. H. Brown a year after the 1855 election: “Of all the avowed friends I had in the canvass of last year, I do not suspect any of having acted treacherously to me, or to our cause.” Indeed, it was Douglas who had lost several friends and allies – like newly elected Senator Trumbull – in this contest because Senator Douglas insisted on fidelity to the Kansas-Nebraska Act. On his return from Washington in July 1854, Douglas had addressed an unfriendly Saturday night rally in Chicago. When the crowd failed to give him the respect he felt he deserved, Douglas stormed: “Abolitionists of Chicago! It is now Sunday morning. I’ll go to church and you may go to hell!”12 It was the sort of inflammatory statement which Mr. Lincoln did not make even when things did not go his way.