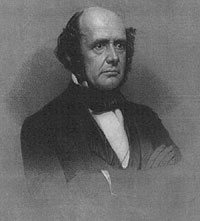 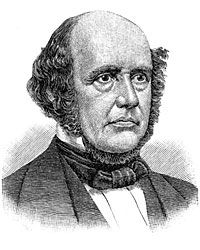 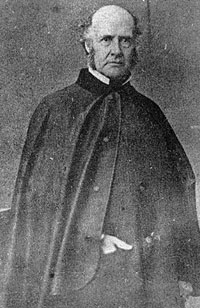 George Ashmun was a congressional colleague of Abraham Lincoln in the late 1840s. Lincoln Scholar F. Lauriston Bullard noted that the Massachusetts Whig “was five years older than his confrere from Illinois, a graduate of Yale, an eminent lawyer, a student of human nature, who exercised great influence with the men whom he chose to know. For years, whether at home or in Washington, he wrote editorials and communications for the Springfield Republican. “11 Like Mr. Lincoln he was a fervent critic of President James Polk’s initiation of the Mexican-American War. While Mr. Lincoln admired Kentucky Whig leader Henry Clay, Ashmun was a devoted supporter of Massachusetts Whig Daniel Webster. Both Ashmun and Mr. Lincoln dropped out of politics in the early 1850s after experiencing political disappointments. While a member of Congress with Ashumn, Mr. Lincoln voted for Ashmun’s resolution accusing President James Polk of having begun the Mexican-American War “unnecessarily and unconstitutionally.”

Ashmun was not originally selected as a delegate to the 1860 Republican National Convention, but he replaced a delegate who could attend. Bullard wrote: “On the train the Massachusetts delegation decided to push Ashmun for the permanent chairmanship of the convention. Murat Halstead, one of the most reliable of newspaper men present, recorded in his account of that memorable meeting that Ashmun at once proved his ability as a presiding officer, and was ‘a treasure to the convention.’ How much the chairman may have known of the manipulations which obtained the nomination for the Railsplitter we cannot ascertain.” As chairman of the convention, wrote Lincoln biographer William E. Barton, Ashumn “had a good voice and gave just and clear rulings….”22 Bullard noted that Ashmun told the delegates in winding up the national convention: “There never was elected to the House of Representatives a purer, nor a more intelligent and loyal Representative than Abraham Lincoln….You have a candidate worthy of the cause. You are pledged to his success; humanity is pledged to his success; the cause of free government is pledged to his success. The decree has gone forth that he shall succeed…”33

Ashmun led a small delegation from Chicago to Springfield to inform Mr. Lincoln officially of his nomination. In the Illinois state capital, Ashmun told the party’s new presidential nominee: “I have, sir, the honor, in behalf of the gentlemen who are present – a Committee appointed by the Republican Convention recently assembled at Chicago – to discharge a most pleasant duty. We have come, sir, under a vote of instructions to that Committee, to notify you that you have been selected by the Convention of the Republicans at Chicago for President of the United States. They instruct us, sir, to notify you of that selection, and that Committee deem it not only respectful to yourself, but appropriate to the important matter which they have in hand, that they should come in person, and present to you the authentic evidence of the action of that Convention; and, sir, without any phrase which shall either be considered personally plaudatory to yourself, or which shall have any reference to the principles involved in the questions which are connected with your nomination, I desire to present to you the letter which has been prepared, and which informs you of your nomination, and with it the platform resolutions and sentiments which the convention adopted. Sir, at your convenience we shall be glad to receive from you such a response as it may be your pleasure to give us.44 Later the two former congressmen had what Ashmun called “a pleasant interview.”55

Ashmun performed many useful services for President Lincoln but claimed never to have sought a patronage position in his government. He was, however, detailed on a special assignment to Canada at the beginning of the Lincoln Administration. Before leaving on his diplomatic mission, Ashmun brought Senator Stephen A. Douglas to meet with President Lincoln. Ashmun is the source of information about the conversation in which the Illinois Democrat pledged his support for the war policies of his long-time Republican rival. As Ashmun recalled, “I felt that the occasion was one of the whole people of the North; and that this would be greatly ensured by a public declaration from Mr. Douglas. The friendly personal relations which had long existed between us justified an effort in that direction on my part; and late in the afternoon I decided to make it.”66 Before his death less than two months later, Douglas helped rally the North behind the Union cause. During the Trent Affair with Britain later that year, Ashmun helped facilitate a meeting between Canadian foreign minister Alexander T. Galt and President Lincoln. Again, the December 4 meeting was instrumental in leading to a resolution of the crisis.

Ashmun’s precise loyalties to President Lincoln during the war are harder to fathom. In a July 1863 letter to General Nathaniel Banks, a fellow Massachusetts Republican, Ashmun praised Banks and denigrated Washington politicians. He said “We are drifting – but whither? There is no Pilot. But I trust in Providence to raise one for us.” He added: “I always keep up constant friendly intercourse with the President, who is truly honest and well-meaning – but as for the rest – they are not of the quality to attract me, & I avoid them. Mr. Seward has taken some pains to be civil lately, – & always speaks kindly & even more so of you. Mr. Chase is fully bent on the next Presidency, & the radical elements through the country are ready to go for him against Mr. Lincoln. The latter says nothing; & for that reason is suspected of a desire for re-election. Madame Mrs. Lincoln has spoken to me on the subject, disclaiming all knowledge of his wishes.”77 Ashmun again wrote Banks in early 1864 after a meeting with Mr. Lincoln: “We had quite a lively time, and have developed a state of things of great interest. The President favored our general views from the first; but he has been thwarted by Mr. Chase, who seems determined to keep every possible influence in his own hands to bear upon the presidential question.”88

On February 6, 1864, Ashmun was attempting to arrange for permits to trade in cotton along the Mississippi. He was being thwarted by the Treasury Department. He wrote General Nathaniel Banks that there “can be no doubt but that Salmon P. Chase is desparately [sic] bent on supplanting the President. All the signs, external & internal, prove this; but Mr. L. is as fully determined to hold on, & I do not see any possibility of the success of a combination against him. I have had but little conversation with him directly on the subject, but Mrs. L. keeps me throughly informed of everything, – & you may rely upon the existence of the ripest state of inflammation between Mr. L. and Mr. C. This very matter of the granting of permits by Mr. C to bring cotton into our lines, in contravention of his own published regulations, may prove the spark for an explosion at any moment. It only needs to get the proofs that he has done so; & they are likely to be forthcoming in due season.”99

Ashmun also met with President Lincoln at the White House shortly before he went to Ford’s Theater on night of assassination. According to White House staffer Thomas Pendel: “On the fourteenth day of April 1865, in the evening, just previous to the time when the President and Mrs. Lincoln were going to the theatre, George Ashmun of Massachusetts, called on Mrs. Lincoln, and I showed him into the Red Parlor, took his card upstairs, and soon the President and Mrs. Lincoln, with Mr. Colfax, then Speaker of the House, came downstairs and went into the Red Parlor where Mr. Ashmun was waiting. They all entered into a lively local conversation, and came out of the Red Parlor presently, and stood in the inner corridor. Their conversation was about the trip Mr. Colfax proposed to take across the continent. They then passed out of the corridor into the main vestibule, and stood in the main entrance, where they again chatted. Mr. Colfax bade the President and Mrs. Lincoln good evening, and went upstairs to see the Private Secretary, Mr. John G. Nicolay. Mr. Ashmun went out on the portico with the President and Mrs. Lincoln, said good-bye, and started off downtown. Ned Burke and Charles Forbes, the coachman and footman, respectively, drove over to a private residence, and took in a coach Major Rathbone and Miss [Clara] Harris, who was the daughter of Senator Ira Harris of New York.”1010

In their conversation that night, President Lincoln first rebuked Ashmun for seeking a commission to adjudicate a cotton claim and then promised to meet with him the next morning. By then, Mr. Lincoln was dead. Ashmun later served as a director of the Union Pacific Railroad.