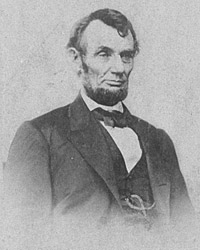 Lincoln in front of his Lincoln’sSpringfield home

“The friends I left that parting day,
How changed, as time has sped!
Young childhood grown, strong manhood gray,
And half of all are dead.”1

Mr. Lincoln wrote these lines about his Indiana childhood but they reflected his lifelong preoccupation with friends. “The better part of one’s life consists of his friendships,” Mr. Lincoln wrote to Joseph Gillespie in 1849.2 A decade earlier, he wrote William Butler, “I am willing to pledge myself in black and white to cut my throat from ear to ear, if when I meet you, you shall seriously say, that you believe me capable of betraying my friends for any price.” And two decades later, President Lincoln wrote Secretary of State William H. Seward, “The loss of enemies does not compensate for the loss of friends.”3 President Lincoln was so conscious of the importance of friends that he told journalist Noah Brooks that he was much-berated General Henry Halleck’s “friend because nobody else was.”4 Mr. Lincoln said of Halleck to one congressional critic that “the man who has no friends – should be taken care of.”5

In Mr. Lincoln’s Temperance Address before the Washington Temperance Society on February 22, 1842, friendship was clearly on his mind: “When the conduct of men is designed to be influenced, persuasion, kind, unassuming persuasion, should ever be adopted. It is an old and a true maxim, that a ‘drop of honey catches more flies than a gallon of gall.’ So with men. If you would win a man to your cause, first convince him that you are his sincere friend. Therein is a drop of honey that catches his heart, which, say what he will, is the great high road to his reason, and which, when once gained, you will find but little trouble in convincing his judgment of the justice of your cause, if indeed that cause really be a just one. On the contrary, assume to dictate to his judgement, or to command his action, or to mark him as one to be shunned and despised, and he will retreat within himself, close all the avenues to his head and his heart; and tho’ your cause be naked truth itself, transformed to the heaviest lance, harder than steel, and sharper than steel can be made, and tho’ you throw it with more than Herculean force and precision, you shall no more be able to pierce him, than to penetrate the hard shell of a tortoise with a rye straw.”6

Mr. Lincoln did not forget his friends. Fellow attorney Abram Bergen remembered President Lincoln’s “sympathy for some of the poor friends of his struggling youth…”7 J. Rowan Herndon, who knew Mr. Lincoln as a young man in New Salem, wrote: “in fact he was a friend to all and all a friend to him.”8 Herndon recalled that Mr. Lincoln was the “favorite of all of them and he Loved all of them as they Loved him.” Mr. Lincoln “was the favorite of all at home Men & women & Childern.”9

Journalist Brooks, who knew Mr. Lincoln in both Illinois and Washington, observed: “It was noticeable that Mr. Lincoln’s keenest critics and bitter opponents studiously avoided his presence; it seemed as though no man could be familiar with his homely, heart-lighted features, his single-hearted directness and manly kindliness and remain long an enemy, or be any thing but his friend. It was this warm frankness of Mr. Lincoln’s manner that made a hard-headed old ‘hunker’ once leave the hustings where Lincoln was speaking, in 1856, saying, ‘I won’t hear him, for I don’t like a man that makes me believe in him in spite of myself.”10

“Friend” was one of Mr. Lincoln’s favorite words. He often used it as a salutation at the beginning of his letters, even for those persons he did not know well but generally agreed with – like New York Tribune editor Horace Greeley. Mr. Lincoln frequently used “Your friend as ever” as a close for letters as well – usually restricting its use to longtime friends like Dr. Anson G. Henry or Joshua F. Speed. “”Yours very truly” was a more customary close. As President, Mr. Lincoln began a letter to the King of Siam: “Great and good friend.”11

“Friend” was also one of Mr. Lincoln’ s favorite words in speeches. He began speeches by references to his “friends.” He closed speeches by references to friends. He referred to his friends as “friends.” He frequently referred to his opponents as “friends” in the 1858 debates with Senator Stephen Douglas. He repeatedly referred to Douglas himself in their debates as “my friend.” Mr. Lincoln said that Douglas “and I are about the best friends in the world, and when we get together he would no more think of fighting me than of fighting his wife.”12

Mr. Lincoln closed that campaign with a speech in Springfield that began: “I stand here surrounded by friends – some political, all personal friends, I trust.”13 After he lost the election to Douglas, Mr. Lincoln wrote a fellow attorney: “In the last canvass I strove to do my whole duty both to our cause, and to the kind friends who had assigned me the post of honor; and now if those friends find no cause to regret that they did not assign that post to other hands, I have none for having made the effort, even though it has ended in personal defeat.”14

Even women could be friends. Mr. Lincoln’s fiancée, Mary Owens was addressed as “Friend Mary.” When he broke off his engagement with her, he wrote Mrs. Eliza Caldwell Browning and closed the letter “Your sincere friend.” Mr. Lincoln’s preoccupation with affection is reflected in a passage he highlighted in a book by Mary G. Chandler, The Elements of Character: “The motive power in man is Affection. What he loves he wills, and what he wills he performs. Our Character is the complex of all that we love.”15

When Mr. Lincoln announced his candidacy for the State Legislature in March 1832, he balanced ambition with friendship: “Every man is said to have his peculiar ambition. Whether it be true or not, I can say for one that I have no other so great as that of being truly esteemed of my fellow men, by rendering myself worthy of their esteem. How far I shall succeed in gratifying this ambition, is yet to be developed. I am young and unknown to many of you. I was born and have ever remained in the most humble walks of life. I have no wealthy or popular relations to recommend me.” All Mr. Lincoln had in either life or politics was his friends. He signed off his first campaign announcement: “Your friend and fellow-citizen.”16

Springfield businessmen William Butler maintained that Mr. Lincoln became a legislative candidate “because of the standing he had got in the county, and especially the prominence given him by his captaincy in the Black Hawk War – because he was a good fellow – because he told good stories, and remembered good jokes – because he was genial, kind, sympathetic, open-hearted – because when he was asked a question and gave an answer it was always characteristic, brief, pointed, à propos, out of the common way and manner, and yet exactly suited to the time place and thing ? because of a thousand things which cannot now be remembered or told.”17 Law partner William H. Herndon maintained: “His story-telling propensity, and the striking fitness of his yarns – many of them being of the bar-room order – in illustrating public questions…was really one of the secrets of his popularity and strength.”18

When Mr. Lincoln recalled this 1832 defeat for his 1860 campaign biography, he interpreted it terms of relationships: “And this too while he was an avowed [Henry] Clay man, and the precinct the autumn afterwards, giving a majority of 155 to Genl. Jackson over Mr. Clay. This was the only time A was ever beaten on a direct vote of the people. He was now without means and out of business, but was anxious to remain with his friends who had treated him with so much generosity, especially as he had nothing elsewhere to go.” Describing his relocation to New Salem from his family’s farm, Mr. Lincoln had written: “A. stopped indefinitely, and, for the first, as it were, by himself at New-Salem, before mentioned. This was in July 1831. Here he rapidly made acquaintances and friends.”19

Mr. Lincoln’s early biographer, Josiah G. Holland, wrote: “Wherever he moved he found men and women to respect and love him. One man who knew him at that time says that ‘Lincoln had nothing, only plenty of friends.’ And these friends trusted him wholly, and were willing to be led by him.” It was a trait Mr. Lincoln nurtured through his presidency. Wrote Holland: “People were glad to see him rise, because it seemed just that he should rise. Indeed, all seemed glad to help him along.”20 Another early biographer and friend, Isaac Arnold, wrote that Mr. Lincoln “loved, and trusted, and confided in the people to a degree rarely known in a statesman. He had faith in the common every-day folk, with a yearning for their happiness almost paternal. The people seemed to feel instinctively how thoroughly he trusted them, and they revered and trusted him in turn.”21

The people trusted but did not trifle with Mr. Lincoln. “With all his awkwardness of manner, and utter disregard of social conventionalities that seemed to invite familiarity, there was something about Abraham Lincoln that enforced respect,” wrote journalist-soldier Donn Piatt. “No man presumed on the apparent invitation to be other than respectful I was told at Springfield that this accompanied him through life. Among his rough associates, when young, he was leader, looked up to and obeyed, because they felt of his muscle and his readiness in its use.”22

Even his detractors were drawn to him. The New York Herald was a newspaper not known for its warmth toward President Lincoln. A Herald reporter filed this description of the President-elect on the train-ride to Washington in February 1861: “Putting prejudice aside, no one can see Mr. Lincoln without recognizing in him a man of immense power and force of character and natural talent. He seems so sincere, so conscientious, so simple hearted, that no one can help liking him and esteeming any disparagement of his ability or desire to do right, as a personal insult.”23