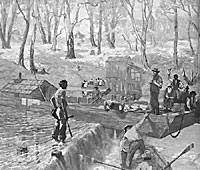 Abraham Lincoln navigating a barge down the Mississippi 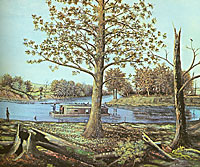 Abraham Lincoln navigating a barge down the Mississippi River

Many of Mr. Lincoln’s ideas about friendship were formed in New Salem and the Black Hawk War in 1832.1 George M. Harrison served with Mr. Lincoln in the Black Hawk War in 1832 and returned to Sangamon with him by canoe and on foot. “I think, that I never saw Mr Lincoln angry or desponding; but always cheerful, and his spirit and temper such as would engender the like cheerfulness in all surrounding minds: in fact the whole company, even amid trouble and suffering, received Strength & fortitude, by his buoyancy & elasticity.”2 Fellow soldier William G. Greene recalled that Mr. Lincoln “was idolized by his men & generally by all the Regiment & Core to which he belonged.”3 Clary’s Grove resident Henry McHenry recalled “all the men in the Company – as well as the Regiment to which he & they belonged loved him well – almost worshipped him.”4

New Salem teacher Mentor Graham remembered that Mr. Lincoln emerged from the Black Hawk War with the reputation as a “kind hearted & noble man who did his duty well without fear.”5 A fellow Black Hawk soldier recalled “I think, that I never saw Mr Lincoln angry or desponding, but always cheerful, and his spirit and temper such as would engender the like cheerfulness in all surrounding minds; in fact the whole company, even amid trouble and suffering, received Strength & fortitude, by his buoyancy & elasticity.”6 In the Black Hawk War, according to biographer Benjamin Thomas, Mr. Lincoln “met men whose friendship was valuable to him – John Calhoun, who later appointed him deputy surveyor; John T. Stuart, who became his law partner; and several rising young Illinois politicians.”7 Moreover, Mr. Lincoln’s election as captain of his militia company clearly demonstrated the practical importance and immediate utility of friends.

Thomas P. Reep, who met some of the erstwhile residents of New Salem late in their lives, wrote: “In each of these [militia] companies were a number of Sangamon County residents whose acquaintance he cultivated …The friendship endured throughout the remainder of his life, and his adoption of the law as a profession was materially influenced by his friends.”8

Lincoln biographer William E. Gienapp wrote: “Lincoln’s modest demeanor, affable manner, and rollicking sense of humor gained him many friends, and village loafers regularly congregated in the store to listen to histories. ‘Geniel’ and ‘fun loveing,’ he ‘was always the centre of the circle where ever he was’ and ‘always had a story to tell.’ Reflective of his social background, the stories he regaled all-male audiences with were sometimes crude, although they generally did not deal with sexual matters (Lincoln was rather prudish where women were concerned.)”9

Law partner William Herndon wrote of Mr. Lincoln’s New Salem colleagues that “a strong bond of affection united them together, and if a contest had arisen over the conflict of order between the United States authorities and those emanating from Captain Lincoln or some other Illinois officer – as at one time was threatened – we need not be told to which side the Sangamon County company to a man would have gone.”

Historian Gienapp wrote of New Salem: “The unpretentious newcomer quickly became part of the community. Attuned to the communal work patterns of frontier society by which neighbors helped one another, Lincoln readily participated in activities such as a raising houses, harvesting crops, and repairing the milldam. His truthfulness and reputation for fair dealing invariably led residents to select him to judge races and other contests. Lincoln’s judgment ‘was final,’ declared on inhabitant. ‘People relied implicitly on his honesty, integrity, and impartiality.’ While he was temperate – he complained that alcohol left him ‘flabby and undone’ – he was no prig and did not either assume an air of moral superiority or seek to impose his values on others. Declining to judge people harshly, he made ‘great allowances for men’s foibles,’ another associate asserted, and his conciliatory approach and obliging manner earned him additional friends. Thanks to his sociability and fondness for visiting, he soon ‘knew every man, woman and child for miles around.'”10

Those relationships helped him through tough times. “By dint of sundry jobs here and there, helping [Abner] Ellis in his store today, splitting rails for James Short tomorrow, he managed to keep his head above the waves,” wrote Herndon. “His friends were firm – no young man ever had truer or better ones – but he was of too independent a turn to appeal to them or complain of his condition.” 11 Historian Thomas wrote that Mr. Lincoln’s faith was based in part on “the worth and fundamental goodness of plain people, like those whom he grew up with those at the little village of New Salem who helped him get a start in life, and those he knew…on the circuit.”12

“At New Salem Lincoln found himself,” wrote Thomas. “The activities and contacts of his New Salem years revealed the possibility of betterment and gave him some conception of his own capacity.” Even the failure of his attempt at storekeeping could drive Mr. Lincoln from New Salem. “He believed that if he could succeed anywhere he could do it at New Salem. He had no intention of evading his obligations, and he wished to remain with his friends,” wrote Thomas.13 He impressed local residents like innkeeper James Rutledge with his personality, his intelligence and character – and encouraged him to run for the legislature. His character served as an advertisement for friendship – and most of his neighbors bought the product.

“From his earliest days in New Salem he had met with the friendliest attitude on the part of the villagers, both men and women,” wrote historian William E. Lilly. “Through all his stay in the village he had retained that friendship, thus early gained. He had come to Springfield with the prestige acquired by having been perhaps the most potent figure of the group that swung the Legislature into selecting that town as the capital, and so had the good graces of the townfolk from the beginning. This friendship, too, he had retained and augmented, until now. Then too, Lincoln was a highly social man, and needed and enjoyed friendships probably more than most strong men.”14

Campaigning for legislative office in and near New Salem also helped Mr. Lincoln develop friendships. His style of campaigning in his second try for legislative office involved doing small favors for constituents as he traveled around Sangamon County. He amused children, did chores, and occasionally helped them harvest crops. On one occasion, Mr. Lincoln was stopped by a stranger, Dr. Charles Chandler, who was rushing to Springfield to register his homestead before a “land shark” could beat him to the paperwork. Mr. Lincoln came upon Dr. Chandler on a worn-out steed and offered to loan him his fresher horse. After adjusting the harness and saddle to accommodate the smaller rider, Mr. Lincoln said: “There, doctor, mount my horse and leave me yours and don’t let any grass grow under his feet on the way. Leave him at Herndon’s stables where I will have yours sometime today, and we will swap back. I want to get you and your pill bags and specie into the land office ahead of that shark. No thanks – just go!”15

This friendliness paid off. “In 1832 while he got a very large vote in his own precinct of New Salem, they hadn’t voted for him very well in other parts of the county,” recalled law partner Stephen T. Logan. Mr Lincoln suffered by being a Whig candidate in a Democratic area. “This made his friends down there very mad, and as they were mostly democratic, but were for Lincoln on personal grounds, in the next race (1834) they told their democratic brethren in the other parts of the county that they must help elect Lincoln, or else they wouldn’t support the other democratic candidates. This they did purely out of their personal regard for him, and through that influence he was elected in 1834,” said Logan.16

At key moments in Mr. Lincoln’s life, his friends rallied around him. Mr. Lincoln understood how to accept as well as give friendship. New Salem friends bailed him out when his horse, saddle and surveying tools were seized. When girlfriend Ann Rutledge died, Mr. Lincoln went into a deep depression. “He was seen walking alone by the river and through the woods, muttering strange things to himself,” wrote biographer Ida Tarbell. “He seemed to his friends to be in the shadow of madness. They kept a close watch over him; and at last Bowling Green, one of the most devoted friends Lincoln then had, took him home to his little log cabin, half a mile north of New Salem, under the brow of a big bluff. Here, under the loving care of Green, and his good wife Nancy, Lincoln remained until he was once more master of himself.”17