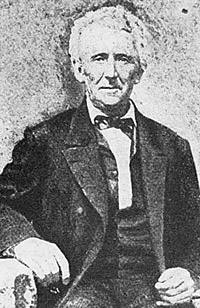 “My first acquaintance with Mr Lincoln was in May or June 1831 at New Salem,” said James Short. “At that time I lived in Coxe’s Grove, on the line between Morgan and Sangamon, and on coming into New Salem at that time, Mr. Lincoln was pointed out to me by my sister, now Mrs Elias Hohimer, whom Mr L. had before that time employed to make him a pair of pantaloons,” Short later wrote contemporary biographer William H. Herndon. “Without the necessary of a formal introduction we fell in together and struck up a conversation, the purport of which I have now forgotten. He made a favorable impression upon me by his conversation on first acquaintance through his intelligence & sprightliness, which impression was deepened from time to time as I became better acquainted with him.”1

In a letter to Martin M. Morris on March 26, 1843, Mr. Lincoln wrote that Short was “as honorable a man as there is in the world.”2 James Short was one of the first residents of the New Salem area and came to know Mr. Lincoln as soon as he moved to New Salem, shortly after he had taken a flatboat to New Orleans for Denton Offut. His farm was near the farm owned by James Rutledge, father of Anne Rutledge. Mr. Lincoln sometimes stayed at the Short farm and visited at the Rutledge farm. Short recalled Mr. Lincoln’s fondness for “pitching quoates, telling Stories, and all proper amusements.” Mr. Lincoln was “cheerful, and full of Highlarity and fun which made him Companionable and rather conspicuous among his associates.”3

According to Short, “Mr. L boarded with the parents of Miss Ann Rutledge, from the time he went to New Salem up to 1833. In 1833 her mother moved to the Sandridge & kept house for me, until I got married. Miss R. Staid at N.S. for a few months after her mother left, keeping house for her father & brothers, & boarding Mr L. She then came over to her mother. After my marriage, the Rutledges lived about half a mile from me. Mr L. came over to see me & them every day or two. I did not know of any engagement or tender passages between Mr L and Miss R at the time. But after her death, which happened in 34 or 35, he seemed to be so much affected and grieved so hardly that I then supposed there must have been something of the kind.”4

Mr. Lincoln often helped New Salem friends with chores. “Frequently when Mr L was at my house he would help me gather corn. He was the best hand at husking corn on the stalk I ever saw. I used to consider myself very good, but he would gather two loads to my one.”5

“Uncle Jimmy” helped Mr. Lincoln out of one of his most embarrassing financial difficulties. After Lincoln and Berry bought the contents of [Reuben] Radford’s store – which had been very briefly bought out by William Greene, their note to Greene was assigned to Radford who assigned it to Peter Van Bergen. Because Berry died, Mr. Lincoln replaced the original note held by Van Bergen with one signed by Greene and himself. Van Bergen went to court and was awarded a judgment which led to the seizure of Mr. Lincoln’s “horse, saddle, bridle, compass, chain, & other surveyor’s instruments,” according to Short. “Mr. L. was then very much discouraged and said he would let the whole thing go by the board.” Short tried “to put him in better spirits. I went on the delivery bond with him, and when the same came off – which Mr L did not attend – I bid in the above property at $120.00, and immediately gave it up again to Mr L.” Mr. Lincoln later repaid his debts to both Short and William Greene.6 “Uncle Jimmy, I will do as much for you sometime,” Mr. Lincoln reportedly said in thanks.7

According to Lincoln biographer William E, Barton, “the horse which had been taken on the Van Bergen execution was not fully paid for at the time. Thomas Watkins, of Petersburg, and sold the horse to Lincoln for fifty dollars, and of this amount ten dollars remained unpaid. Although few men in Sangamon County were better able to risk ten dollars, and few men more likely to pay it than Abraham Lincoln, Watkins brought suit against Lincoln in the court of Squire Edmund Greer. Fortunately, Lincoln was able to borrow ten dollars and to settle with Watkins before the case came to trial.”8

Short himself came on hard times and relocated to California. On a return visit to Illinois in 1858, Martin Morris wrote Mr. Lincoln: “Did you know that your old friend Short had returned from Cal.? he has Just Stept in to the shop whilst I am writing and tells me to say to you that he is still with you in political sentiment as well as warm personal feeling and shall be happy to take you by the hand on 29th.”9 Short’s luck in California was also bad until he was appointed an Indian agent for the Round Valley Indian Reservation in California by President Lincoln. Then, it got worse. He was suspended in 1863, visited Washington in the summer and wrote the President in October. When his case was not cleared up, he wrote President Lincoln in January that “I know Every moment of your time is fully ocupide and under ordinary circumstances could not reasonably Expect you to reply but from the Long Intimacy and friendship that have Existed with us and from my great need at this time I have to claim and do expect your attention to my case when I saw you Last Summer I thout from what you and the Secretary of the Interior told me and and from what you boath wrote to Steel that I would of got my pay and been Reinstated on my arival here for I new all the charges that Hanson had prefered against me was false and could not be Substatiated by any disentrested testimony”. Short blamed his problems on the greed and chicanery of George M. Hanson, an Illinois politician who was superintending agent for the Northern District of the California Indian Office and whose misbehavior led to his dismissal from his office in 1863.

Short had been accused (unfairly he said) of gambling and cohabiting with an Indian woman. He said he merely used two young native women to cook and do his housework. In May 1864, he began a letter to Mr. Lincoln with a poignant appeal to his longtime friendship: “the time has been when I addressed you that I was fully satisfied that I was addressing my best friend and I hope there has no change taken place to cause to Justly cause any I do know that I have persued the Same Strait forward course honorable course that I Ever have since you first knew me the contrary Reports to the Department notwithstanding did you ever know or hear of my telling or being accused of telling a false hood and I do say that Every charge prefered against me is basely false….”10 Short concluded a convoluted letter to the President in his spelling-challenged style:

…well now my old friend you have the power directly vested in you to have writed by being renstated I should not ask it but I have been Shamefully treated without any Just cause Wronged and Ruined for Life pecuniarly I do hope that you will attend to my case and take time Some night or Sunday and write me if it is only a dozen Lines it would do me a great dell of good I am Low Spirited among Strangers without a dollar and not able to work I have not got my money from government yet nor not mutch prospect that I can See hoping that Every thing will come around right.11