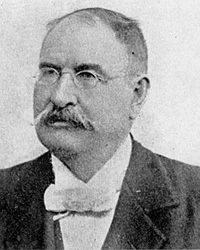 Edward L. Baker was editor and co-owner of Illinois State Journal in Springfield, Illinois. He had also married Mrs. Lincoln’s niece, Julia Edwards. He also was a lawyer and a friend of Mr. Lincoln who claimed that he took a message from Mr. Lincoln in Springfield to David Davis in Chicago the day before Mr. Lincoln’s Republican nomination for President in 1860. Baker then returned to Springfield, where Mr. Lincoln awaited the news of the voting. Another lawyer, Henry Rankin, wrote how the news was received:

It was about nine o’clock on the morning of May 18, 1860, when Lincoln came into his law office. H.J. Littlefield, a student, Lewis Rosette, a lawyer, the writer, and one or two others were present. His first words were: ‘Well, boys, what do you know?’ Mr. Littlefield told what he had last heard. Lincoln then said that Dr. [William] Wallace had come down from Chicago that morning, and had said that he thought Seward showed great strength.
In a few minutes, Edward L. Baker, one of the editors of the Illinois State Journal, came in with two telegrams. The first told of the delegates coming into the Convention hall. The other told that the names of the candidates for nomination had been placed before the Convention, and that Lincoln’s name had received by far the greatest applause. Baker then went out, but returned hurriedly in a short time with a telegram showing the votes on the first ballot. Lincoln took the dispatch in his hand and looked at it with no expression of word or manner. His face was a blank. Again Baker went out. Lincoln remained silent for several minutes, then, got up, saying: ‘The dispatches appear to be coming to the Journal office, by arrangement, I presume; we had better go over there.” On our way to the Journal office, as we were passing the telegraph office, Lincoln said: ‘Let us go up. It is about time for the second ballot to come.” All but Littlefield and I went upstairs to the telegraph office, while we went on direct to the Journal office. Baker and Bailhache, the editors, and a few others were present when we arrived.
A few minutes later the second ballot came in, showing a gain of seventy-nine votes for Lincoln while Seward had only gained eleven votes. Just then Lincoln and several others came into the editorial rooms. The dispatch was handed to him. No one spoke a word. I can never forget the look that came on his face as he read it. At that moment he believed he would be nominated. It was only a short time by the watch, – but it seemed long to the expectant friends in the Journal office, – before the third ballot was handed in, and it was shouted: ‘Lincoln’s nominated,’ and there followed a call for three rousing cheers. But the desire to hear the vote as reported in the dispatch cut them short. ‘Read the dispatch,’ was the call. It was read aloud and handed to Lincoln who, after glancing at it, said, ‘I felt sure this would come when I saw the second ballot.” There was a hearty hand-shake of congratulations all round, followed by three rousing and prolonged cheers. No one but the nominee was able to control the joy the nomination had brought. He sat erect, rigid, and his face wore the firmset stern lines I had seen in it when he spoke at Petersburg in 1856.1

Another observer that day, attorney Charles Zane, said that the news came in at the telegraph office where Baker and some others had returned to the telegraph office after news of the second ballot. When the results of the third ballot arrived, “the operator threw down his pencil evidently excited then taking it up wrote out the dispatch and handed it to the local [editor, presumably Baker] who read it to himself. Those present asked how it looked he said very bad – which lengthened some of our faces considerably. On the way to the Journal Office he remarked that it looked bad for Mr Seward and the other defeated Candidates. Entering the Office where Mr Lincoln was seated the Local [editor] proposed three cheers for the next president, which were given then read the dispatch.”2

Baker himself remembered Mr. Lincoln trying to play a handball game that afternoon. Attorney Christopher C. Brown said he played with Baker, Pascal P. Enos as well as himself.3 Lawyer Charles Zane recalled that leaving the Journal‘s office, Mr. Lincoln “went down to the sidewalk, and several men were near, playing a game which consisted in knocking the ball with their hands against a building. Mr. Lincoln had played occasionally with them to benefit his shoulders, which were a little stiff at times, as he said, and they ceased playing and came up to congratulate him. He said: ‘Come up, boys we will shake hands while we can, we do not know what effect this may have upon our opportunities hereafter.”4 Mr. Lincoln was “nervous, fidgety – intensely excited,” according to Christopher Brown, who said that Mr. Lincoln amused them with stories.5 They later went to a tavern to “play a game of Billiards.” But the billiard tables were occupied so they continued to the Journal Office.

Mr. Lincoln “was a frequent visitor at the Journal office, always greeting every one with a pleasant word,” wrote Joseph D. Ropers, who worked at the Illinois State Journal in the late 1850s and early 1860s. “Most of these visits would occupy an hour or more, Mr. Lincoln talking with Mr. Baker, the editor, and reading the New York Tribune and other Eastern papers. These papers would be at least two days old when received; general telegraphic news reports were then unknown to the newspapers in Springfield. In those days out-of-town visitors at the office were not very frequent. When some one or more of the prominent men of the State called at the office, and Mr. Lincoln was present, questions concerning national and state affairs, then before the country, would be taken up at once, talked about and discussed.”

According to Roper, “In all these private conversations and discussions, and I heard many of them, Mr. Lincoln seemed to me to be the leading spirit, animated and earnest in his statements, holding the attention of his hearers, who seemed spell-bound and deeply impressed by his logic. He was not only fluent in his conversation, but he had at all times a most agreeable manner in expressing his views.”6

Baker’s newspaper had been published under numerous mastheads and by numerous combinations of owners. According to Lincoln biographer William Barton: “The Sangamon Journal was published weekly from November 10, 1831, to June 13, 1858. It appeared first as a daily on Monday, June 13, 1858, and has since been issued both daily and weekly, under the various titles of Sangamo Journal, Sangamon Journal, and Illinois State Journal. The title of Sangamon Journal was retained from the beginning till January 12, 1832, when, with number 11, it was changed to Sangamo Journal. This paper supported the Whig Party, thus favoring a national bank, protective tariff, and internal improvements. From the birth of the Republican Party the Journal supported its principles. Published by Simeon and Josiah Francis, 1832-1835; Simeon Francis 1835-1838; Simeon, Allen and J. Newton Francis, 1838-1843; Simeon and Allen Francis, 1843-1855; W. H. Bailhache and Edward L. Baker, 1855-1862. On September 23, 1847, the name was changed to Illinois Journal and on August 13, 1855, was changed to that by which it has since been known, namely Illinois State Journal.”7

Because of President-elect Lincoln’s post-election silence on political issues in late 1860 and early 1861, political observers looked to other sources for evidence about his attitude toward the nation’s growing political crisis. One trusted source had always been the editorial pages of the Illinois State Journal, for which Mr. Lincoln had often written. According to historian Paul M. Angle: “Disclaiming any intention of speaking for the President-Elect, Baker left no doubt of his own attitude. Neither South Carolina nor any other state could dissolve the Union by passing resolutions to that effect. ‘Disunion, by armed force, is TREASON,’ he wrote in an editorial so forceful that it was reprinted all over the country, ‘and treason must and will be put down at all hazards.”8

Although Baker himself did not receive a federal appointment, his partner William Bailache did – causing Mr. Lincoln no end of grief. In June 1863, Mr. Lincoln wrote Baker: “Not to exceed two hours after You left me I received a letter from Springfield, renewing the pressure upon me in the matter we talked of; and, in fact, leaving me no alternative but to make some change there. I can say but little beyond what I then said to you. The appeal to me in behalf of Mr. [Ninian] Edwards and Mr. [William] Bailhasche [sic], for a hearing, does not meet the case. No formal charges are preferred against them, so far as I know; nor do I expect any will be made; or, if made, will be substantiated. I certainly do not suppose Mr. Edwards has, at this time of his life, give up his old habits, and turned dishonest; and while I have not known Mr. Bailhasche so long, I have no more affermative reasons to suspect him.”

The problems of their conduct could not be divorced from problems of friendship, Mr. Lincoln continued: “The trouble with me is of a different character. Springfield is my home, and there, more than elsewhere, are my life-long friends. These, for now nearly two years, have been harrassing me because of Mr E. & Mr. B. I think Mr. E. & Mr. B., without dishonesty on the other hand, could have saved me from this, if they had cared to do so. They have seemed to think that if they could keep their official record dryly correct, to say the least, it was not any difference how much they might provoke my friends, and harrass me. If this is too strong a statement of the case, still the result has been the same to me; and, as a misfortune merely, I think I have already borne a fair share of it.” He concluded patiently: “In what I may do, I shall try to so shape it, as to not seem to mean more than is really intended.”9

The Edwards and Bailache cases had a link in Julia Edwards Baker – who was Baker’s wife and Edwards’ daughter. She was actually a hindrance to good relationships – since Mrs. Lincoln increasingly despised her niece Julia. Mary Todd Lincoln wrote one friend “about poor, silly, Julia Baker! How unfortunate a Mother, must consider herself, to so rear, a child…” She went on to relate the stories circulating about Julia’s recent visit to Washington. A friend had told her that “‘one of our most distinguished officials in Washington told me & vouched for its truth – that Mrs B – so conducted herself, that she would have disgraced the city, got up in the morning, at daylight, rode out, with a gentleman, in a closed[d] carriage, leaving her Husband in bed, miserable silly man! – After respectable visitors at 11 o’clock at night, had, bid good evening – Mrs B’s voice, was heard at two o’clock – with gentlemen, in the library, on the same floor, with the President’s apartments, the latter, disclaiming against such proceedings’ – this was all true…”10

Mrs. Lincoln grew estranged as well from Julia’s husband, calling him “unprincipled.”11 Baker continued as the Journal’s publisher until 1874. Ironically despite her dislike of his parents, Mary Lincoln grew very attached to their son, Edward “Lewis” Baker, Jr., who was a considerable help to her in her widowhood.