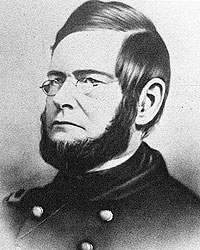 The interests of Springfield editor Simeon Francis often coincided with those of his good friend, Abraham Lincoln. Early in Mr. Lincoln’s legislative career, Francis championed the shift of the State Capital from Vandalia to Springfield – a project which was also a pet cause of Francis. Since Francis had founded the Sangamo Journal in Springfield in 1831, any economic development of the growing city was in his interest. Commenting on one of Mr. Lincoln’s speeches that was published in 1837 in the Journal, Simeon Francis wrote: “Mr. Lincoln’s remarks…in this paper are quite to the point. Our friend carries the true Kentucky rifle, and when he fires seldom fails of sending the shot home.”1

Robert S. Harper observed in Lincoln and the Press that the office of the Sangamo Journal was as much Mr. Lincoln’s office as was the office of his law partner, John T. Stuart: “He made the newspaper office his loafing place, telling stories and talking politics. The editor and his wife treated Lincoln as one of the family, and a lifelong friendship was formed.”2 Contemporary biographer William H. Herndon wrote that Francis “ran the Whig organ, and entertained great admiration for Lincoln’s brains and noble qualities. The esteem was mutual, and it is no stretch of the truth to say that for years Lincoln exercised undisputed control of the columns of the Journal himself.”3

For nearly two decades, Mr. Lincoln promoted Francis’ interests and helped produce his paper while Francis promoted Mr. Lincoln’s career. “The files of the Journal during the period Lincoln was at Vandalia reveal a series of quaintly written articles about the goings-on in the legislative hall, and some authorities are convinced they were written by the tall Sangamon Solon,” wrote Harper. “The Journal of January 6, 1837, carries a satirical letter in which the correspondent pretends he was formerly employed by the National Intelligencer at Washington but quit because he could not make a living there. There are many other letters in the Journal files during the next few years that bear the unmistakable sign of Lincoln. These are signed ‘Johnny Blubberhead, Citizen of Sangamon, Conservative, Our Correspondent and Sampson’s Ghost. Lincoln later used the Pseudonyms Old Settler and Rebecca.”4

Herndon wrote: “I frequently wrote the editorials in the Springfield Journal, the editor, Simeon Francis, giving to Lincoln and to me the utmost liberty in that direction. Occasionally Lincoln would write out matter for publication, but I believe I availed myself of the privilege oftener than he.”5 Herndon said: “Lincoln and I both kept on furnishing political matter of many varieties for the Springfield Journal until 1860. Many of the editorials that I wrote were intended directly or indirectly to promote the interest of Lincoln.”6

There were limits to which Francis was willing to go to protect politician Lincoln, according to Harper. Mr. Lincoln had anonymously authored a handbill on August 5, 1837 in which he alleged that the candidate for probate judge, General James Adams, had defrauded the estate of Joseph Anderson. About two weeks later, the contents of the handbill were published in the Sangamo Journal with an editor’s note: “It having been stated this morning that the subscriber had refused to give the name of the author of the hand bill above referred to (which statement is not true): to save any farther remarks on this subject, I now state that A. Lincoln, Esq. is the author of the handbill in question.”7 In the election, Adams defeated Mr. Lincoln’s close friend, Dr. Anson G. Henry.8

It was the Shields episode that caused Francis the most trouble. “James Shields was then Auditor of State, elected on the Democratic ticket; and from his swaggering dress, his dudish manners and his satisfaction with himself as a ladies’ man, quickly drew on himself the ridicule of the Whigs,” wrote Alton Telegraph reporter William H. Souther several decades after he witnessed the near-duel between Mr. Lincoln and Shields. “Lincoln wrote a series of letters to the Sangamo Journal, after the style of the ‘Bigelow Papers,’ keenly satirizing young Shields, who fumed under these assaults, and thus encouraged their continuance. Finally a poem was sent to the Journal by Mary Todd and Julia Jayne, in which Shields was described as receiving a proposal of marriage from ‘Aunt Rebecca,’ and later another rhyme followed, celebrating the wedding. In the phrase of the bounding West, these mischievous girls made life exceedingly wearisome for the dudish State Auditor.”9

According to early Lincoln biographer Isaac Arnold, State Auditor “Shields was so sensitive he could hot bear ridicule, and would much rather die than be laughed at. On seeing the papers, he went at once to Mr. Francis, the editor, and furiously demanding the name of the author, declaring that unless the name of the writer was given he would hold the editor personally responsible. Francis was a large, broad man, and Shields was very thin and slim, and the editor realized that with his great bulk it would be very unsafe for him to stand in front of Shields’ pistol. He had plenty of stomach, but none for such a fight. He was a warm personal and political friend of Lincoln; and knowing the relations between him and Miss Todd, in this dilemma he disclosed the facts to Lincoln, and asked his advice and counsel. He was not willing the expose the lady’s name, and yet was extremely reluctant himself to meet the fiery Irishman on the field.”10

According to Souther, “On the appearance of the last poem Shields sought the editor of the Journal, in a towering rage, and demanded the name of his tormentor. The editor, in a quandary, went to Lincoln, who unwilling that the two young women should figure in the affair, ordered that his own name be given as the author. Soon after, he received a letter from Shields, demanding an apology,” wrote Souther. This removed Francis from the affair – which was eventually resolved short of the duel Shields demanded.11

The aborted duel was soon followed by a wedding. Alton Telegraph editor George T. M. Davis wrote: “While the relatives of Mary Todd were trying to discourage the courtship and while Mr. Lincoln was being made to feel he was not welcome at the Edwards home, where Miss Todd was living with her sister, the residence of Simeon Francis was the meeting place of Mr. Lincoln and Miss Todd. It was at the house of Mr. Francis that Mr. Lincoln and Miss Todd were to be married until the relatives, yielding to the inevitable, insisted on a home wedding,” wrote Davis. “The personal friendship between Mr. Lincoln and Mr. Francis continued very close for years. All that the Journal could do to advance the political interests of Mr. Lincoln it did.”

When Lincoln was appointed Secretary of the Oregon Territory in 1849, he requested that Simeon Francis be named instead; Francis did not, however, get the appointment. “Lincoln refused the governorship of Oregon,” according to George T. M. Davis, “under circumstances showing a sense of honor not common in political life.” Davis wrote: “John Addison of the City of Washington, with myself and a few other strong political and personal friends of Mr. Lincoln, then at the seat of our national government, united in an effort to have him appointed governor of the territory of Oregon. Those efforts were so far crowned with success as to be dependent only upon the willingness of Mr. Lincoln to accept the position to secure his appointment. Mr. [John] Addison was delegated to correspond with Mr. Lincoln, to inform him of the assurances given that his appointment would follow if he would accept it, and to urge him to do so.”12

Mr. Lincoln wrote Addison: “I can not but be grateful to you and all other friends who have interested themselves in having the governorship of Oregon offered to me; but on as much reflection as I have had time to give the subject, I cannot consent to accept it. I have an ever abiding wish to serve you; but as to the secretaryship, I have already recommended our friend Simeon Francis, of the ‘Journal.’ Please present my respects to G.T.M. Davis, generally, and my thanks especially for his kindness in the Oregon matter.”13

Indeed, in September 1849, Mr. Lincoln wrote Secretary of State John M. Clayton: “I send you a paper recommending Simeon Francis for the appointment of Secretary for the Oregon Territory. I know I have no right to claim the disposal of the office; but I do think, under the circumstances, that he ought to receive the appointment. If a long course of uniform and efficient action as a whig editor; if an honesty unimpeached, and qualifications undisputed; if the fact that he has advanced to the meridian of life without ever before asking for an office, be considerations of importance with the Administration, I can not but feel that the appointment, while it will do him justice, will also do honor to the Administration.14

According to Davis: “The motives influencing Mr. Lincoln in declining the public honor which was held in abeyance for him were these: His friend and neighbor, Simeon Francis, who was the proprietor and editor of the Sangamon Journal of Springfield, and at the time the leading and most influential Whig paper in the state, was an applicant for the office of secretary of the Territory of Oregon. Mr. Lincoln had not only strongly recommended Francis to the president, but, upon both personal and political grounds, felt the deepest interest in his success. Of course, Mr. Lincoln was well aware that the president would not, for a moment, entertain the idea of making both appointments from the same state. And as soon as he received the letter from Mr. Addison, without hesitation and with his proverbial magnanimity and high sense of honor, wrote the letter in which he said: ‘I can not accept it.’ This disinterestedness became the more conspicuous, as Mr. Lincoln had been advised by us that for political reasons the president had determined against the appointment of Mr. Francis during his administration. Mr. Francis never did receive the appointment, but a short time previous to the election of Mr. Lincoln to the presidency he removed with his wife to Oregon, on account of his health.15

Francis remained an unapologetic admirer of Mr. Lincoln and eventually did move to Oregon in 1859 having sold the Journal to Baker and Bailaiche. He became editor of the Oregonian and the Oregon Farmer. He was also appointed an Army major and paymaster by Mr. Lincoln, serving until 1870.