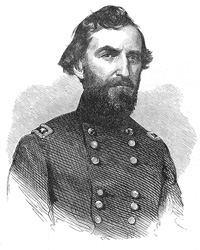 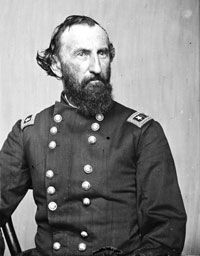 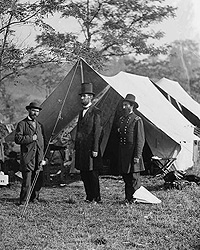 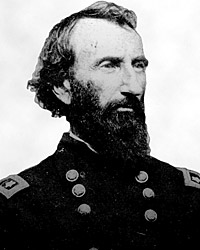 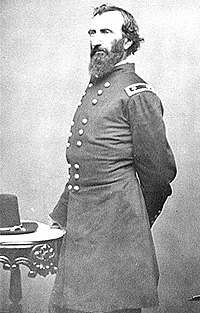 Fellow Illinois generals found John A. McClernand to be a braggart. “We did the fighting. He did the writing,” wrote Illinois politician Richard Oglesby, whose war career helped make him Governor in 1864.1 McClernand was a “vain irritable overbearing exacting man who is possessed of the monomania that it was a mere clerical error which placed Grant’s name and not his in the Commission of the Lieutenant General.” wrote presidential aide John Hay.2

Oglesby was unfair about General McClernand’s record on the battlefield. He was a competent general. McClernand had a mixed field record with some failures and some successes. But Oglesby was right that McClernand’s writing tended to be boastful. It was his relationships with his superiors rather than his field record which eventually doomed him. Neither his immediate supervisor, Ulysses S. Grant, or Grant’s supervisor, Henry W. Halleck, had any use for him. Eventually, President Lincoln bowed to their judgment at the exepnse of Illinois friendships and political needs. Concluded McClernand biographer Richard L. Kiper: “McClernand knew and corresponded frequently with the president; Grant and Lincoln would not meet until March 1864. Nevertheless, newspapers reported that ‘Unconditional Surrender’ Grant had won a string of victories in the West at a time when generals in other theaters were suffering defeat after defeat. He had earned the confidence of Lincoln and was in no danger of being replaced. After Vicksburg, McClernand was expendable.”3

It was a hard fall for the ambitious general. “McClernand had high postwar political aspirations,” wrote Duane Schultz in The Glorious Fourth. “As the conqueror of Vicksburg, he believed he would go far, perhaps all the way to the White House. And there was more. The fifty-year-old McClernand was about to marry the twenty-six-year-old sister of his late wife. What better way to impress his new bride than a honeymoon on the Mississippi River, culminating in his glorious capture of a major Southern stronghold?”4 But less than a month before the fall of Vicksburg, McClernand was sent back to Illinois by his commander – his military and political careers in shambles.

General McClernand was enthusiastic, enterprising, courageous, brash, and undisciplined. He was also trouble. For President Lincoln, General McClernand was both a political asset and a military problem. Back in Illinois, McClernand even had political clout with the Republican Governor, Richard Yates. In the councils of his military superiors, he had none. So in the middle of the siege of Vicksburg, McClernand was dismissed from his command by the general commanding the attack, Ulysses S. Grant. Generals Grant and McClernand clashed from September 1861 until he was dismissed in June 1863. What really injured McClernand was not only Grant’s enmity, but the intense dislike of most of Grant’s professional friends – including William T. Sherman, John Rawlings, and James Harrison Wilson. Even Charles Dana, the War Department’s civilian eyes and ears in the Mississippi campaign, adopted their contempt for McClernand.

Perhaps no other general presented such complex personal and military problems for President Lincoln. Iowa Congressman Josiah Bushnell Grinnell raised a complaint about a Democratic bureaucrat one day. Mr. Lincoln replied by asserting his need to conciliate Democrats: “There is General McClernand from my state, whom some say I use better than a radical, and the devotees of the dead Douglass I honor and praise often, as I would have promoted their chief had me lived. There is too much of mixing war and party in the field, when real fighting out of the trenches would better suit the case.” Added Grinnell “I knew he was alluding to McClellan’s letter.”5

Democrat McClernand had served with Mr. Lincoln in both the State Legislature (1836-1838 and 1840-1842) and in Congress, where he represented Shawneetown from 1843 and Springfield from 1859-1861. In 1839, a dispute arose over the office of secretary of state, to which McClernand had been appointed by the governor. When it went to court, Mr. Lincoln was the attorney for the company that held the office’s official papers, while McClernand himself was represented by Stephen A. Douglas in a losing effort to install him office. About two decades later in 1860, Mr. Lincoln and McClernand practiced together in the final legal case of Mr. Lincoln’s career. The two politicians clearly exchanged favors over the years. In May 1847, McClernand wrote the new Congressman Lincoln asking for his help in retaining Braxton Parish in the Land Receiver’s office at Shawneetown.” McClernand closed the letter: “You may count upon me under like circumstances for a similar favor, or for a response in any way in my power.”6

Mary Lincoln was good friends with McClernand’s first wife Sarah. Mrs. Lincoln pressured her husband: “The irresistible Col. Mc. cannot do without his wife” in Washington.7 Mary wrote a friend in July 1859 to “give you an account of some of us, on May day. We had a children’s and grown people’s picnic on that day, out at Col McClernand’s farm, for the first time, since you left, had the pleasure of meeting your good sister. You can perhaps imagine how much you were missed & how frequently your name was mentioned, on that day.”8

Although not close as some other Illinois Democrats to the President, McClernand had maintained a cordial relationship over the years. “Despite the rhetorical excesses during the campaign of 1860, relations between the president and John McClernand had remained respectful,” wrote McClernand biographer Richard L. Kiper. “Although the Democrat once spoke of Lincoln’s want of personal beauty,’ personal attacks proved the exception. McClernand acknowledged Lincoln as one of the foremost debaters in the country and, after the election, publicly expressed support for the new president’s efforts to maintain the Union.”9

Mr. Lincoln had developed long-standing relationships with many Douglas Democrats in Illinois. He recognized that their active support was key to the political stability of the state. He therefore gratified the desire of McClernand, John A. Logan and James Shields to become generals. After the Battle of Belmont in early November 1861 in which McClernand took a leading part, President Lincoln wrote him: “This is not an official but a social letter. You have had a battle, and without being able to judge as to the precise measure of its value, I think it is safe to say that you, and all with you have done honor to yourselves and the flag and service to the country. Most gratefully do I thank you and them. In my present position, I must care for the whole nation; but I hope it will be no injustice to any other state, for me to indulge a little home pride, that Illinois does not disappoint us.”

Before writing, Mr. Lincoln had a long discussion with Congressman Elihu B.Washburne about the logistical problems under which McClernand labored: “Be assured, we do not forget or neglect you. Much, very much, goes undone; but it is because we have not the power to do it faster than we do. Some of your forces are without arms, but the same is true here, and at every other place where we have considerable bodies of troops. The plain matter of fact is, our good people have rushed to the rescue of the Government, faster than the government can find arms to put into their hands.” He added: “It would be agreeable to each division of the army to know its own precise destination: but the Government cannot immediately, nor inflexibly at any time, determine as to all; nor if determined, can it tell its friends without at the same time telling its enemies.”10

According to biographer Richard L. Kiper,, “McClernand quickly responded to his benefactor. ‘Accept my grateful acknowledgment for your kind commendation,’ he wrote. He then took advantage of their rapport to provide the commander in chief advice on conditions in the western theater. Success had been rare because of the lack of a unified command.”11 McClernand performed competently over the next nine months, but was frustrated by being subordinate to generals like Ulysses S. Grant. In August 1862 he sought and obtained a furlough to go to Washington about raising new troops.