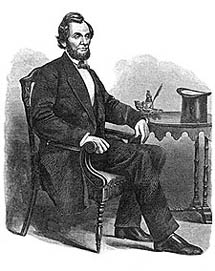 Mr. Lincoln was notable for his ability to maintain cordial relations with Democrats as well as Whigs and Republicans. In the midst of the September 18, 1858 debate in Charleston, Mr. Lincoln reached out and pulled up former Congressman Orlando B. Ficklin to attest to his voting record on support of the Mexican-American War. “I gave all the votes that Ficklin or [Stephen] Douglas did, and perhaps more.” Given a chance to speak, the former legislative and legal colleague said: “My friends, I wish to say this in reference to the matter. Mr. Lincoln and myself are just as good personal friends as Judge Douglas and myself. In reference to this Mexican war, my recollection is that when Ashmun’s resolution (amendment) was offered by Mr. [George] Ashmun of Massachusetts, in which he declared that the Mexican war was unnecessarily and unconstitutionally commenced by the President – my recollection is that Mr. Lincoln voted for that resolution.”1

As Ward Hill Lamon remembered the scene: “I was at the time sitting on the stand beside Hon. O.B. Ficklin, who had served in Congress with Mr. Lincoln in 1847. Mr. Lincoln reached back and took Ficklin by the coat-collar, back of his neck, and in no gentle manner lifted him from his seat as if he had been a kitten, and said: ‘Fellow-citizens, here is Ficklin, who was at that time in Congress with me, and he knows it is a lie.’ He shook Ficklin until his teeth chattered. Fearing that he would shake Ficklin’s head off, I grasped Mr. Lincoln’s hand and broke his grip. Mr. Ficklin sat down, and Lincoln continued his address.”

According to Lamon, who was Mr. Lincoln’s law partner in Bloomington, “After the speaking was over, Mr. Ficklin, who had been opposed to Lincoln in politics, but was on terms of warm personal friendship with him, turned to him and said: ‘Lincoln, you nearly shook all the Democracy out of me to-day.”2 It was hard to shake the friendship out of Mr. Lincoln.

Mr. Lincoln as much a politician as he was a lawyer. Biographer Benjamin P. Thomas wrote that “in Lincoln’s early manhood, while the law provided bread and butter, politics became his life. For fifteen years he had spent hour after hour attending caucuses, conventions, and legislative sessions, writing party circulars and delivering party speeches, formulating party policy and directing party strategy.”3 Chicago journalist Horace White, who served as Secretary of the Illinois Republican State Committee, noted that “Lincoln was a frequent visitor at the campaign headquarters, and on important occasions he was specially sent for. The committee paid the utmost deference to his opinions. In fact, he was nearer to the people than they were. Travelling the circuit he was constantly brought in contact with the most capable and discerning men of the rural community. He had a more accurate knowledge of public opinion in central Illinois than anybody else[,] what kind of arguments would be influential with the voters and what kind of men could best present them.”4

Mr. Lincoln’s political colleagues in Illinois were a remarkable bunch. “Nine of Lincoln’s Illinois legislative colleagues became major party nominees for governor of Illinois: William A. Richardson, William H. Bissell, Robert R. McLaughlin, Lyman Trumbull, E.B. Webb, Joel A. Matteson, August C. French, Thomas M. Kilpatrick, and Cyrus Edwards,” wrote Paul Simon.”3 Other legislative colleagues – like James Shields, Stephen Douglas, and Orville Browning served in the U.S. Senate. Among the prominent Union generals to emerge from this group were John Palmer, Richard Oglesby, and John Logan. They went on to serve Illinois as governor, senator or both. Mr. Lincoln’s friend, Richard Yates also held both of the state’s top political jobs. Many of Illinois’s congressmen during Mr. Lincoln’s rise to the Presidency were notable in their own right – Owen Lovejoy for his persistent opposition to slavery; Elihu Washburne for his political sponsorship of Ulysses S. Grant (under whom he served briefly as Secretary of State); John Todd Stuart for being Mr. Lincoln’s legal mentor, friend and sometimes political enemy; Isaac Arnold for writing an early biography of Mr. Lincoln; John Wentworth for his influence as a Chicago mayor and newspaper owner. Even those who sought political office and lost – like Leonard Swett – made their marks in their support of and influence with Mr. Lincoln.

Mr. Lincoln’s network of lawyer-politician friends played a critical role in the formation of his 1860 presidential campaign. One lawyer-politician-friend, Jackson Grimshaw wrote: “In the winter of 1860 while at Springfield attending the Courts I spoke to Mr. Lincoln about the propriety of allowing his name to be used as a Candidate for the Presidency, Grimshaw met with Mr. Lincoln, Secretary of State Ozias Hatch, and Republican State Chairman Norman B. Judd in the State Capitol, where attorney-politicians often gathered. “We all expressed our personal preference for Mr. Lincoln as the Candidate for the Presidency and asked him if his name might be used at once in Connection with the Coming Nomination and election.” The next day, Mr. Lincoln gave his assent.6

But once Mr. Lincoln reached the White House, many of these same men developed an insatiable appetite for patronage – not all of which Mr. Lincoln could satisfy and some of which downright annoyed him. They used their influence not only on him but also on each other to influence the president – seeking thereby to multiply their influence. For example, General Richard Oglesby wrote Colonel Ward Hill Lamon in March 1863: “Received a letter yesterday from Judge Davis who informs me that you and Swett joined him heartily in efforts to secure my promotion, that this was done without my knowledge or encouragement, from pure motives of personal attachment and kind old remembrances.”7

Like the Eighth Circuit, the political system of Illinois was an important school for Mr. Lincoln. Robert L. Wilson was one of the “Long Nine” who served with Mr. Lincoln in the State Legislature. Wilson went to Washington after the Inauguration and after watching the president conduct business, he told Mr. Lincoln that his job reminded him “of the office of the Justice of the Peace.” President Lincoln replied: “Yes, but it is hardly as respectable.” Mr. Lincoln “went to say that when he first commenced doing the duties, he was entirely ignorant not only of the duties, but of the manner of doing the business, he said he was like the Justice of the Peace, who would often speak of the first case he had ever tried, and called it, his ‘great first case least understood.”8

Many of these politicians later sought patronage positions for themselves and their relatives during the Civil War. Mr. Lincoln’s loyalty to them sometimes brought him into conflict with his own cabinet. “I became acquainted with Mr. Lincoln the year of 1840, in Springfield, Illinois, — when he was 31 years of age and I was 20. For more than 10 years with him were intimate and confidential, ” Samuel C. Parks. He was ousted by Attorney General James Speed in April 1865 after he took an unexcused leave of absence to attend to the death of a child in Illinois. As in many such cases, the result was a political dilemma that embarrassed Mr. Lincoln and forced him to intervene.

Some of these friends, lawyers, politicians and editors got messed up in questionable deals and situations. They included New Salem mentor James Short, Springfield lawyer Ninian Edwards, Ozias M. Hatch’s brother Reuben, Illinois State Journal co-owner William Bailache, and even Orville H. Browning. Thomas Pickett, Rock Island Weekly Register editor, was appointed agent of Quartermaster on Rock Island. He was removed in April 1863 on charges of profiting from sale of lumber and stone at the depot. President Lincoln pressed for a hearing, writing “Mr. Pickett is an old acquaintance and friend of mine, and I will thank you, if you will, to set a day or days and pace on and at which to take testimony on the point. Notify Mr. Pickett and one J. B. Danforth (who as I understand makes the charge) to be present with their witnesses. Take the testimony in writing offered by both sides, and report it in full to me.”0 As a result, he ordered Montgomery Meigs to restore Pickett to his position.

“Lincoln, even after his elevation to the Presidency, always had an eye out for his friends,” wrote contemporary biographer William H. Herndon, who cited the letter he wrote back to Illinois friends – including the one about the Pickett allegations. Mr. Lincoln’s “letters to others were of the same warm and generous tenor, but yet the foolish notion prevailed that he had learned to disregard the condition and claims of his Springfield friends. One of the latter who visited Washington returned somewhat displeased because Mr. Lincoln failed to inquire after the health and welfare of each one of his old neighbors. The report spread that he cared nothing for his home or the friends who had made him what he was. Those who entertained this opinion of the man forgot that he was not exactly the property of Springfield and Illinois, but the President of all the States in the Union.”10