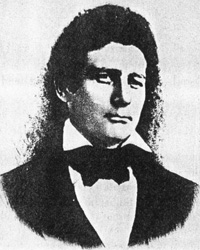 “When Lincoln collapsed with melancholia in January 1841, John J. Hardin took over as leader of the Whigs in the legislature,” wrote Willard King, biographer of David Davis. “A tall man with a bold face, he made an adequate leader though he lacked Lincoln’s skill as a manager of men. Born in Kentucky, the son of a United States Senator, Hardin had graduated from Transylvania University and had practiced law for ten years in Jacksonville, Illinois. As assignee of the State Bank, Hardin retained Davis to collect many debts due it, and Davis acted as Hardin’s agent to look after his lands in McLean County.”1

Mr. Lincoln’s relationship with attorney John Hardin lasted less than a decade – but it made up in drama what it lacked in length. In 1842, Mr. Lincoln’s friends rallied around him when he was challenged to a duel by James Shields. Hardin and Dr. Revel W. English used their good offices as friends of both Shields and Mr. Lincoln to avoid the duel at the last minute. According to Francis Browne, news of the duel “reached the ears of General Hardin, who immediately started after the party, reaching the scene just as the preliminaries were being arranged. He interposed, saying, ‘This is all nonsense,’ and succeeded in putting a stop to the whole proceeding.”2

Biographer Ida Tarbell wrote: “The arrangements for the affair were about completed when the duellists were joined by some unexpected friends. Lincoln and [Elias] Merryman, on their way to Alton, had stopped at White Hall for dinner. Across the street from the hotel lived Mr. Elijah Lott, an acquaintance of Merryman. Mr. Lott was not long in finding out what was on foot, and as soon as the duellists had departed, he drove to Carrollton, where he knew that Colonel John J. Hardin and several other friends of Lincoln were attending court, and warned them of the trouble. Hardin and one or two others immediately started for Alton. They arrived in time to calm Shields, and to aid the seconds in adjusting matters ‘with honor to all concerned.'”3 Mr. Lincoln later wrote Hardin: “I wish you would measure one of the largest of those swords we took to Alton, and write me the length of it, from tip of the point to tip of the hilt, in feet and inches. I have a dispute about the length.”4

Only a year later Hardin and Edward D. Baker contested Mr. Lincoln for the Republican nomination for Congress. Mr. Lincoln withdrew his name at the Whig convention – which he himself attended as a delegate pledged to Baker. Hardin won the nomination and the election, but Mr. Lincoln successfully introduced the principle that the Whig nomination should be rotated every two years – thus limiting Hardin’s victory. “Although Lincoln and Hardin worked together on many issues and projects, the relationship between the two was never warm,” maintained biographer Paul Simon. He cited the fact that although Mr. Lincoln campaigned for Hardin for Congress in 1843, he did not vote for him.5

But Mr. Lincoln was not above asking Congressman Hardin for a political favor. “You perhaps know of the great scramble going on here about our Post-office,” he wrote Hardin in December 1844. “Upon general principles, you know this would be no concern of the whigs, but in this particular case, if it be in your power to do any thing, you may thereby do a favour to some of your friends here, without disobliging any of them, so far as I believe.” He then pressed the case of J.R. Diller, who would help the “destitute” family of the deceased postmaster if he were selected.”6

The two faced off again in 1845 when Hardin sought to return to Congress and contested Mr. Lincoln for a nomination he thought was his. “Lincoln’s adroit maneuvering and tireless efforts made it clear to all that Hardin’s chances of securing the nomination for himself were doomed,” wrote Paul Findley in A. Lincoln: The Crucible of Congress. “Accordingly on February 26, 1846, the Sangamo Journal published Hardin’s letter withdrawing his name from consideration. The General had been outgeneraled.”7 Mr. Lincoln would not play by Hardin’s rules.

In January 1846, Mr. Lincoln had written John J. Hardin, “I have always been in the habit of acceding to almost any proposal that a friend would make.” But he added that as to acceding to Hardin’s plan for selection of the next Whig candidate for Congress, “I am truly sorry I can not [accede] in this.”8 But friendship also presumed a code of conduct. “Let nothing be said against Hardin…nothing deserves to be said against him.” Mr. Lincoln wrote B.F. James on December 6, 1945.9 Mr. Lincoln wrote a second letter to Hardin the same day in which he wrote: “Yours of the 4th., informing me of Hardin’s communication and letter, is received. I had ascertained that such documents had been sent you, even before I received your letter. Nor is the conclusion they lead to – the certainty that he intends to run for congress – matter of surprise to me. I was almost confident of it before. Now as to the probable result of a contest with him.”10

As Hardin and Lincoln competed for the Whig congressional nomination, Mr. Lincoln wrote Hardin in February 1846: “Now, if I have sought the nomination in an improper manner, you have the right, to that extent, to be dissatisfied. But I deny all impropriety on my part, in the matter.” Mr. Lincoln contended: “I have constantly spoken of you in the most kind and commendatory terms, as to your talents, your services, and your goodness of heart. If I falsify this, you can convict me. The witnesses live and can tell.”11

There was a gentler side to their relationship. “In 1839 Mr. Lincoln, being then a lawyer in full practice, attended all the courts adjacent to Springfield. He was then attending court at Christiansburg, about thirty miles distant. I was there when the court broke up. Quite a number of lawyers were coming from court, to Springfield. We were riding along a country road, two and two together, some distance apart,” reported Joshua F. Speed. Mr. Lincoln and John Hardin were at the rear of the group. “We were passing through a thicket of wild plum, and crab-apple trees, where we stopped to water our horses. After waiting some time Hardin came up and we asked him where Lincoln was. ‘Oh,’ said he, ‘when I saw him last’ (there had been a severe wind storm), ‘he had caught two little birds in his hand, which the wind had blown from their nest, and he was hunting for the nest”. Hardin left him before he found them. Mr. Lincoln finally found the nest, and placed the birds, to use his own words, ‘in the home provided for them by their mother’. When he came up with the party they laughed at him. Said he earnestly, ‘I could not have slept tonight if I had not given those two little birds to their mother.'”12

As President, Mr. Lincoln took pains to care for Hardin’s nest. He looked out for Hardin’s widow and appointed his brother-in-law to a diplomatic post in Panama. “Hardin was ‘our best Whig,’ Lincoln had said after Hardin’s death, and in the heat of their rivalry he generously conceded that Hardin was talented, energetic, and usually generous and magnanimous. He did not underestimate his rival, but saw him as a man of desperate energy and perseverance,” wrote Donald Riddle.13 Fellow attorney Mark W. Delahay described Hardin as “a man of large family influence, an especial favorite among the old Kentucky Whigs of the district, and possessed in a high degree [with] those powers of popular oratory, and of ingratiating himself with the people, which may also be denominated a western characteristic…”14 Lincoln biographer Ronald C. White, Jr., wrote: “Hardin had a bold face that reflected his determined personality. He was an excellent speaker, even though he had a slight speech impediment.”15 Historian Michael Burlingame observed: “Colleagues in the legislature deemed him ‘clever,’ ‘firm,’ fearless,’ and ‘smart.’ Lincoln characterized the intensely ambitious Hardin as ‘our best Whig,’ a ‘man of desperate energy and perseverance’ who ‘never backs out’ and who was ‘talented, energetic, usually generous and magnanimous.’”16