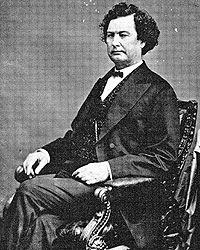 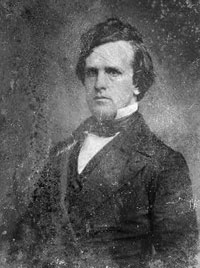 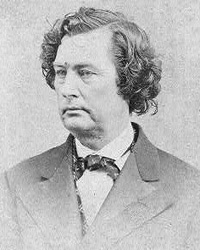 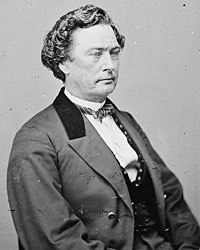 “I recollect the first time I ever saw Old Abe, and I have a great mind to tell you, though I don’t know that I ought to,” recalled Richard Yates. He was on a vacation granted by Illinois College so students could help with their families’ harvest. ” It was more than a quarter of a century ago. I was down at Salem with a friend [William G. Greene], who remarked to me, one day, ‘I’ll go over and introduce you to a fine young fellow we have here — a smart, genial, active young fellow, and we’ll be certain to have a good talk.’ I consented, and he took me down to a collection of four or five houses, and looking over the way I saw a young man partly lying or resting on a cellar door, intently engaged in reading. My friend took me up and introduced me to young Lincoln, and I tell you as he rose up I wouldn’t have shot at him then for a President. Well, after some pleasant conversation, for Lincoln talked sensibly and generally then just as he does now, we all went up to dinner. I ought not to tell this on Lincoln.”1

In his June 1860 speech after Mr. Lincoln had received the Republican nomination for President, Yates said: “I do not mention these hardships of Lincoln’s early life as evincing any great merit in themselves. Many a man among you may say, ‘I am a rail splitter. I have done many a hard day’s work, and if that entitles him to be President, it entitles me to President too.’ All I mean to say in regard to his having been a poor, hard working boy, is that ‘it don’t set him back any.'”2

Yates was reelected in 1852 but his campaign in 1854 looked difficult. Yates indeed was partially responsible for Mr. Lincoln’s re-entry into politics that year after a semi-retirement of four years. Mr. Lincoln emerged to speak on behalf of Yates’ congressional reelection bid and he reluctantly permitted his name to be listed as a Whig candidate for the State House of Representatives from Springfield. Yates was one of the first Illinois Whigs to speak out against Stephen Douglas’ Kansas-Nebraska legislation in 1854. Yates decried “the opening of this dangerous agitation, fraught with such imminent peril to the existence of the Union itself.'”3 Yates also admired Mr. Lincoln’s speeches. He told a friend that Mr. Lincoln’s speech in Winchester in August 1854 was “the strongest speech I ever heard on the subject” of Kansas-Nebraska.4 Yates lost his reelection bid – in part because of his connection with the nascent Know-Nothing movement. Mr. Lincoln was disappointed in Yates’ defeat. He had taken a major role in promoting Yates candidacy – writing Yates in August: “I would like, by your leave, to get an additional paragraph into the Journal, about as follows:

‘To-day we place the name of Hon. Richard Yates at the head of our columns for reelection as the Whig candidate for this congressional district. We do this without consultation with him and subject to the decision of a Whig convention, should the holding of one be deemed necessary; hoping, however, there may be unanimous acquiescence without a convention.’5

Yates’ problems with alcohol through this period were well known. When he was scheduled to appear before the legislature a decade later to give his gubernatorial inaugural address, he could not be found. When he did arrive, according to journalist Henry Villard, “He was too drunk to stand or to read. He fell back into his chair, and the Clerk of the House read the message in his place.”6 The problem was already evident in 1854. Mr. Lincoln wrote Yates’ friend Richard J. Oglesby on September 8:

You perhaps known how anxious I am for Yates’ re-election in this District. I understand his enemies are getting up a charge against him, that while he passes for a temperate man, he is in the habit of drinking secretly–and that they calculate on proving an instance of the charge by you. If, indeed, you have told them any thing, I can not help thinking they have misunderstood what you did tell them. Other things being equal, I would much prefer a temperate man, to an intemperate one; still I do not make my vote depend absolutely upon the question of whether a candidate does or does not taste liquor.

Thousands and thousands of us, in point of fact, have known Yates for more than twenty years; and as I have never seen him drink liquor, nor act, or speak, as if he had been drinking, nor smelled it on his breath, nor heard any man say he ever had and as he has been twice elected to congress without any such thing being discovered I can not but think such a charge as the above must be incorrect. Will you please write me, and tell me what the truth of this matter is? I will reciprocate at any time.7

After his defeat Yates in turn took a role in Mr. Lincoln’s efforts to win election to the Senate. Mr. Lincoln had to round up not only Whig votes but also votes of Democrats opposed to the Kansas-Nebraska legislation favored by James Shields, the incumbent up for reelection, and Stephen Douglas, the author of the legislation. In mid-January 1855, Mr. Lincoln wrote Yates about: “As to myself personally I may start with 20 or 25 votes, but I think I can, in a few ballots, get up to 48 if an election is not sooner made by the other side. But how I am to get the three additional votes I do not yet see. It seems to me the men that their votes are to come from will not go to the other side unless they should be led off on the Bissell trick. If the election should be protracted, a general scramble may ensue, and your chance will be as good as that of any other I suppose. It is said Govr. [Joel] Matteson is trying his hand; and as his success would make a Governor of [Gustave] Koerner, he may be expected to favor this movement. I suppose the election will commence on the 31st. and when it will end I am sure I have no idea.8

Yates was more successful in running with Mr. Lincoln in 1860. He won a three-way contest for Republican nomination for Governor over Norman Judd and Leonard Swett. In defeating Democrat J. C. Allen, Yates led the Republican ticket, running 1,000 votes ahead of Mr. Lincoln. Yates was one of Lincoln organizers at 1860 Republican convention and strong supporter in 1864, when Yates and President Lincoln had to deal with a conspiracy to free Confederate prisoners held at Camp Douglas in Chicago. Early in the war, Governor Yates appointed Ulysses S. Grant as a colonel in the volunteer army and Orville H. Browning as Senator to replace Stephen Douglas. when Douglas died in June 1861 Yates was strong supporter of President Lincoln’s war policies who proactively sent the Illinois militia to St. Louis to take position of arsenal for Union army – despite opposition of Peace Democrats in Illinois Legislature.

Excitable, dictatorial, hard-drinking and somewhat paranoid about southern sympathizers, organizers of the Knights of the Golden Circle and the threat of military insurrection, he peppered President Lincoln with letters about the Southern threat to Illinois but was enthusiastic and enterprising in raising and outfitting Union troops. The top Republican officials in Illinois – Yates, Treasurer William Butler, State Auditor Fred Dubois and Secretary of State Ozias M. Hatch – also frequently pestered President Lincoln about patronage appointments and military promotions. In April 1862, Mr. Lincoln wrote Yates and Butler: “I fully appreciate Gen. [John] Pope’s splendid achievements with their invaluable results; but you must know that Major Generalships in the Regular Army, are not as plenty as blackberries.”9

In August 1862, Yates and President Lincoln exchanged a series of messages displaying their irritation. Mr. Lincoln wired Yates on August 23 at 8 A.M.: “I am pained to hear that you reject the service of an officer we sent to assist in organizing and getting off troops. Pennsylvania and Indiana accepted officers, kindly; and the now have more than twice as many new troops in the field, as all the other states together. If Illinois had got forward as many troops as Indiana, Cumberland Gap would soon be relieved from it’s present peril. Please do not ruin us on punctilio.”10

Yates responded the same day. “I have received your unjust despatch. I have not rejected the service of any officer — the statement is false,” Yates wrote. “Illinois may be behind in getting her troops into the field, because you sent your paymasters, and mustering officers, to Pennsylvania, and Indiana first, but I assert sir, that no State has done more in so short a time, than Illinois has, without aid from your paymasters, and mustering officers, and I point with pride to 50,000 men now ready to go into the field; and only delayed, not by me, but for the want of blankets, tents, guns camp kettles &c, which comes from your departments — I regard your despatch as unkind to me, and unjust to your State.” William Butler and Jesse Dubois added a postscript: “We know what Gov. Yates says to be true, and if your Army officers, were as loyal and efficient as he is, you would hear less complaint. Who is your chief mustering officer here? Is it Col Morrison or Gen Judah?”11

Sometimes, the President sought to gratify Yates without becoming personally involved in Illinois’s problems. In March 1864, John G. Nicolay wrote Secretary of War Edwin M. Stanton: “The President has received the telegram of the Governor of Illinois to the Secretary of War, giving notice of an insurrection in Edgar County in that State, and which you have referred to him for instructions. He directs me to request that you will please consult with the General-in-chief and to comply with the request of Governor Yates, if that shall be the most expeditious and feasible plan.”13

Yates’ tough rhetoric sometimes caught the President in its crosshairs. In 1863, Yates gave a speech in Springfield to a Methodist meeting: “I do not endorse everything Old Abe has done. But he has done mighty well generally. He has a backbone. But it is not quite stiff enough for him. I want to deal rigidly with the rebels. I want to see them eternally damned [Cheers]. No scripturally but politically damned. [Great cheering.] I have visited Old Abe and urged him to use more radical measures and he has said to me, ‘Never mind, Dick, it will be all right yet. Hold still and see the salvation of the Lord!’ [Loud and prolonged cheering, stamping of feet, etc.].”14

Yates and Richard Oglesby were among the last persons with whom Mr. Lincoln visited on the day before his death. Yates had won election to the Senate (1865-71) where he would serve one term as a Radical Republican.