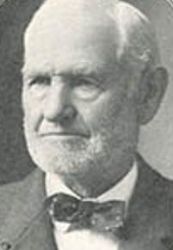 William A. Jayne was a Springfield physician and politician who occasionally functioned as a doctor to the Lincoln family – as did Anson G. Henry and William S. Wallace. Jayne first met Mr. Lincoln in the mid-1830s. Jayne recalled that he “often observed him as he passed to and fro from his meals to his office. He usually walked alone, his head inclined as if he was absorbed in deep thought, unmindful of surrounding objects and persons. Though he had his wonderful gift of humor, I venture to assert that in the long run of years life was to him serious and earnest.”1

Jayne’s sister, Julia Jayne, was a close friend of Mary Todd until February 1855, when Julia’s husband, Lyman Trumbull, defeated Lincoln in a legislative vote for a U.S. Senate seat.

In 1859, Jayne was elected as Springfield’s mayor and the year later, he was elected an Illinois state senator. In October 1859 after a Republican victory in Ohio, according to Lincoln scholar Roy P. Basler, “Upon Lincoln’s return to Springfield from Clinton, on Saturday night a Republican victory parade marched to the Lincoln home. Following a tribute by Dr. William Jayne, Lincoln was invited to proceed to the state house and address the assembled citizens in the Capitol’s rotunda.”2

In early 1861, Lincoln was embarrassed by the amount of patronage extended to the Todd and Trumbull families. William Jayne, who was appointed governor of the Dakota Territory, had been endorsed by the Illinois congressional delegation, however.3 In a memorandum on territorial appointments, Lincoln wrote two names next to governor of “Dacota” before leaving Jayne’s name without a crossout.4 Still, the president wrote his wife’s cousin, John T. Stuart, “Cousin Lizzie [Grimsley] shows me your letter of the 27th. The question of giving her the Springfield Post-office troubles me. You see I have already appointed William Jayne a territorial governor, and Judge Trumbulls brother to a Land-office. Will it do for me to go on and justify the declaration that Trumbull and I have divided out all the offices among our relatives? Dr. Wallace, you know, is needy, and looks to me; and I personally owe him much.”5

Historian Vincent G. Tegeder wrote that Jayne“readily pleased the Radicals by calling for the passage of an antislavery law and a memorial for a Pacific railroad in his first message to the Dakota territorial legislature.” Governor Jayne corresponded with President Lincoln about territorial appointments -including replacement of the territorial provost marshal. President Lincoln responded: “I dislike to make changes in office so long as they can be avoided. It multiplies my trouble and harrassment immensely. I dislike to make two appointments when one will do. Send me the name of some man, not the present Marshal, and I will nominate him to be Provost-Marshal for Dakota.”6

Jayne resigned his gubernatorial position in 1863 in order to try to become the territory’s congressional delegate. He won election and served until 1864.7 Newton Edmunds, chief clerk in the surveyor general’s office for Dakota Territory, was named by President Lincoln as the new territorial governor.

At the end of the Civil War, Jayne returned to Springfield and the practice of medicine. For five years from 1865 to 1880, he again served as Springfield’s mayor. In 1907, Jayne gave a speech about Lincoln in which he said that Mr. Lincoln “was modest, rather retiring than pushing himself forward in society, never sought to be conspicuous.”8 Jayne argued “that no man was less elated by prosperity, or depressed by adversity. He was so mentally balanced, that he could calmly share the triumph or endure defeat.”9

Jayne remembered: “There was not a particle of avarice in Lincoln’s mental make-up. Greediness of wealth was absolutely foreign to his nature. He wanted money sufficient to pay the ordinary living expenses of his household, but he did not care for gold just because he loved to have and handle it. To illustrate this statement I will relate a little story of our college society, of Illinois College – the Phi Alpha Literary Society – and his connection with said society. It was customary for this society to give a series of lectures during the college year, the profits of which were expended in the purchase of books for the society library. Mr. Lincoln was engaged to deliver one of these lectures. After his lecture was over and the audience had left the hall in which the lecture was given he recognized the fact that the audience was not large and therefore the receipts must have been rather small. Mr. Lincoln, with a kind smile, said to the president of the society, ‘I have not made much money for you to-night.’ In reply the president said, ‘When we pay for the rent of the hall, music and advertising and your compensation, there will not be much left to buy books with for the library.’ ‘Well, boys, be hopeful; pay me my railroad fare and 50 cents for my supper at the hotel and we are square.’ That showed our subject’s kindness and liberality all over, yet at that day he was not burdened with cash and could have found good use for a few extra dollars. He thought our poor society needed the money more than he did.”10