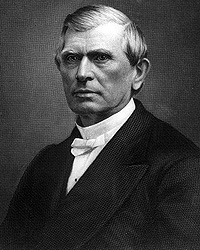 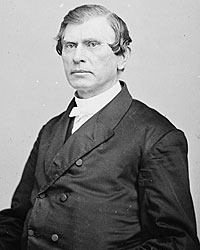 Methodist Bishop Matthew Simpson moved from Ohio to Evanston, Illinois in 1859. Simpson got to know President-elect Lincoln in the winter of 1860-61 when Simpson visited with him in Springfield in search of support for Northwestern University. When President-elect Lincoln left Springfield for Washington, the bishop was in the crowd at the railroad station. After the outbreak of the Civil War Bishop Simpson rushed to Washington. The President “received him cordially,” wrote biographer Robert D. Clark. “The cabinet was to meet that morning, and several members dropped in, including [Secretary of State William H.] Seward. In the course of general talk about the war and its conduct Simpson expressed the opinion that 75,000 was but a beginning of the number of men needed. Seward wondered, acidly, how a clergyman could judge these matters. Another present defended Simpson: as a traveling bishop he had an opportunity that few persons possessed to test the temper of the people, North and South.”1

During the Civil War, Bishop Simpson was based in Philadelphia. He was a supporter of the Union, emancipation and President Lincoln – and gave lectures and speeches around the country on behalf of all three. The Bishop was useful to the President in many ways. One was as a barometer of public opinion; few persons traveled as widely around the nation – even to California and Oregon – as did Bishop Simpson in the course of making speeches and presiding as district conferences of Methodists. Mr. Lincoln also appreciated Bishop Simpson non-religious views. “It was well known that the president occasionally sent for the bishop, in order to procure information about the affairs of the nation,” said fellow Methodist minister Thomas Bowman. “The president said, in substance, ‘Bishop Simpson is a wise and thoughtful man. He travels extensively over the country, and sees things as they are. He has no axe to grind, and, therefore, I can depend upon him for such information as I need.”2 Rev. Bowman recalled:

On one occasion, with two or three friends, I was conversing with Mr. Lincoln near the distant window in the ‘Blue Room,’ when unexpectedly the door opened and Bishop Simpson entered. Immediately the President raised both arms and started for the Bishop almost on a run. When he reached him he grasped him with both hands and exclaimed: ‘Why, Bishop Simpson, how glad I am to see you!’ In a few moments we retired and left them alone. I afterward learned that they spent several hours in private, and that this was one of the times when the Bishop had been specially invited by the President to come to Washington for such an interview.”3

The Lincoln Administration placed particular importance on maintaining the Union support of Methodists and Bishop Simpson was a key leader of Methodists and the Methodists’ most effective speaker. Mr. Lincoln’s “early associations with the Methodists, the religious pioneers and missionaries of the West had impressed him with a high respect for the zeal and energy of that sect,” write Noah Brooks.4 No one exceeded Bishop Simpson in the zeal of his preaching for the Union cause, No one appreciated his message of Providence and patriotism more than President Lincoln. A typical rousing battle cry came from a speech he gave at an Ohio conference of Methodists:

I tell you here to-day I would not give one cent on the dollar for your national liabilities if you allow a single dividing line to be run through your country from the Atlantic to the Pacific. I deprecate war, it is terrible; much of the best blood of the nation has flowed, and more, possibly, will moisten the earth; but if we should divide this land into petty sections, there will come greater strife, which will waste the blood of your children and grandchildren, and there will be sorrow and wailing throughout the generations to come. When I look at this dark picture, much as I dislike war, I yet say, better now fight for twenty- years and have peace than stop where we are.5

Another Methodist minister, John Lanahan, sometimes accompanied Bishop Simpson when he made official visits in Washington: “Mr. Lincoln held him in the highest esteem, and attached much importance to his counsel. He never failed to attend upon his ministry.” Bishop Simpson was careful not to overstep the boundaries of church and state. “At one time during, and I think near the close of the war, Mr. Lincoln and Stanton wanted him to serve as one of an important commission, which he declined as not the best for him as a bishop of the Church.”6 Biographer Robert D. Clark noted that “For the most part Matthew Simpson was cautious and a little uncomfortable in the presence of Lincoln and official Washington, whether he sought political preferment for his friends or bounties for his church.”7

Occasionally, President Lincoln worshiped at one of the Methodist churches in Washington, such as the Foundry Church, where Bishop Simpson preached in January 1863. “Secretary Edwin Stanton and his wife were in front, on chairs; President Lincoln in the altar,” Simpson later wrote. “The President made by contribution a life member; collection $770.”8 Mrs. Lincoln’s cousin, Elizabeth Todd Grimsley later described him as “the beloved, sainted Bishop Matthew Simpson. She cited him and Archbishop John Hughes of New York City as exceptions to the “importunities, meddlesomeness, impatient censure, and arrogance of preachers, politicians, newspapers writers, and cranks.”9

Rev. Bowman, who was chaplain of the Senate, recalled that he “had an opportunity to witness the kind feeling which the president evidently cherished for the bishop. Simpson delivered his wonderful lecture on ‘Our Country’ in one of our churches in Washington. Lincoln, without any mark of distinction, was in the great crowd of hearers. I happened to be near him, and could see his every movement. I never saw a hearer who gave more marked evidence of a personal interest in a speaker than the president gave that evening. He joined most heartily in the frequent, and sometimes prolonged, applause. At one time, as the bishop was speaking of the wonderful opportunity that our country affords to young men, he paused for a moment, and said, ‘Why, it is commonly reported that a rail-splitter has been elected president of the United States!’ This, of course, brought down the house, and I was particularly pleased to see with what almost boyish enthusiasm the president joined in the tremendous applause.”

Rev. Bowman said that at the close of the address, President Lincoln went to the pulpit to greet Bishop Simpson. “Taking the bishop warmly by the hand, he exclaimed, in a voice that could be heard all around, ‘Bishop Simpson, that was a splendid lecture.’ Then, in a low tone of voice, and with an expression of face which indicated a little surprise, a little curiosity, and a good deal of humor, he said, ‘But you didn’t strike the ile!’ I did not see the point, but the bishop did. So he replied, ‘Mr. President, I am surprised at myself to see that, while I have thought so much about the great resources of our country, I should have entirely overlooked our great oil interests. I shall not do so again.’ The next time I heard the lecture the bishop struck ‘the ile.'”10

Simpson gave another major address at the Capitol on the Sunday after President Lincoln’s second inauguration in March 1865. The speech was well attended and well received by the top Union leadership in the executive, legislative and judicial branches assembled in the House of Representatives. According to biographer Clark, “The bishop spoke of the doctrines of the cross – the brotherhood of man, the equality of races, universal liberty, and a community of interests. War, he said, had once been the rule of all nations; but it had become the exception, an outlaw among all peoples. And even this war among brothers, the most terrible of all wars, was about to end. He could not but think ‘when yesterday the sun burst brightly upon the chief magistrate of the nation, just as he stepped forward to take the oath of the highest office in the land, that so the sun of peace would suddenly, and without noise or warning, burst upon the nation and dispel the clouds of war.'”11

Secretary of War Edwin M. Stanton, was particularly solicitous of Simpson and arranged for an army appointment for Simpson’s son. Both Stanton and Simpson came from Cadiz, Ohio, where they had become acquainted. Simpson’s daughter observed that they “were very intimate and very frequently consulted on important topics. No matter how great the pressure, the Secretary’s room was always open to my father. I have heard him say that when calling at the War Department during the anxious days, Mr. Stanton would lead him by the arm into the private office and say, ‘Now, Bishop, pray.'”12

President Lincoln had sufficient confidence in Bishop Simpson that he asked the Methodist Bishop to represent him at the opening of the Philadelphia Sanitary Fair. “At the request of the President of the United States, and in his behalf, I accept from the honored Executive Committee the vast treasures contained in these buildings – the generous offerings of the citizens of New Jersey, Delaware, and Pennsylvania – to be dedicated, in the name of the people, to the use of the sick and wounded in our army and navy. No one, more than myself, regrets the absence of our honored chief-magistrate,” began Bishop Simpson. Speaking of President Lincoln, he said: “Delighted would we have been to hear from his own lips the expression of his sympathy, and to catch the inspiration of his heart, which swells with strong confidence in the glorious results of our present national struggle.”13

Bishop Simpson pushed the President to appoint Stanton as Chief Justice of the Supreme Court in late 1864, according to Stanton biographer Fletcher Pratt. Mr. Lincoln “used [Simpson] as a persuading influence toward leniency in cases involving Confederate sympathizers. But when the question of the Supreme Court appointment came up, the President merely told the bishop: ‘If Mr. Stanton can find a man he himself will trust as Secretary of War, I’ll do it.'”

After President Lincoln’s assassination, Bishop Simpson was prominent in funeral ceremonies both at the White House, where he delivered a prayer and in Springfield, Illinois, where he gave the funeral sermon. “As to his religious experience I cannot speak definitely, because I was not privileged to know much of his private sentiments,” Bishop Simpson said at President Lincoln’s interment in Springfield. “My acquaintance with him did not give me the opportunity to hear him speak on those topics. This I know, however: he read the Bible frequently, loved it for its great truths, and he tried to be guided by its precepts. He believed in Christ the Saviour of sinners, and I think he was sincere in trying to bring his life into harmony with the principles of revealed religion. Certainly if there ever was a man who illustrated some of the principles of pure religion, that man was our departed president.” Bishop Simpson went to say: “Often did he remark to friends and to delegations that his hope for our success rested in his conviction that God would bless our efforts, because we were trying to do right.”14