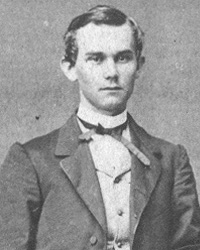 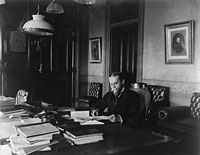 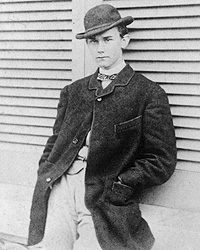 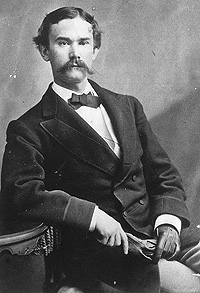 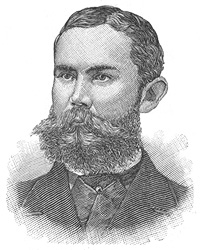 The chief qualification of John Hay for his White House position may have been his sense of humor. Hay could guffaw while colleague John G. Nicolay growled. In comparison to the somewhat morose disposition of Nicolay, Hay had a more cheerful – if occasionally melancholy – personality. “Hay has laughed through his term,” said editor-politician John W. Forney who frequented the White House.1

Hay was described by another White House colleague, William O. Stoddard as “quite young, and looks younger than he is; of a fresh and almost boyish complexion; quite a favorite among the ladies, and with a gift for epigram and repartee.”2 Stoddard wrote of the importance of Hay’s humor in breaking somber mood at the White House:

Mr. Lincoln says that he must laugh sometimes, or he would surely die. He laughed right here, a few Sundays ago. The letters were about done, when in came John Hay, all one bubble. He is sober enough most of the time, but he had heard something funny, and he was good-natured about dividing it. Generally he can tell a story better than most boys of his age, but he broke down on that one before he got well into it. The door was open and so was Nicolay’s, and he heard the peal of laughter when the story proved too much for its narrator, and over he came, with a pen in one hand and a long paper in the other, and he sat right down to listen. Hay began at the beginning, and went on very well until the first good point was reached. It was nothing so wonderful for another time than this, but it was a first-class excuse for a laugh, and all three of us exploded as one.

The whole floor had been as silent as a graveyard or a hospital, until this uproar broke up its Sunday stillness, and we did not know, or had forgotten, that anybody else was within hearing until:

His feet had made no sound in coming over from his room, or our own racket had drowned any foot-fall, but here was the President, and down he sank into Andrew Jackson’s chair, facing the table, with Nicolay seated by him and Hay still standing by the mantel.

The story was as fresh, and was even better told that third time up to its first explosive place, but right there a quartette explosion went off. Down came the President’s foot from across his knee, with a heavy stamp on the floor, and out through the hall went an uproarious peal of fun. It was dying away, and Hay was about to go head, when:

“Mr. President, if you please, sir, Mr. Stanton is in your room.”

There stood Old Edward [McManus] in the doorway, washing his hands and looking penitent, as if he hated to break in upon the apparently untimely, if not unseemly merriment. Senator [Lyman] Trumbull, of Illinois is also out there, on some special errand or other.

There was something all but ghastly in the manner of the death of that story. Through all the sunny, laughter-filled chambers of the Executive office poured thick and fast the gloom and glamour of the death in life that belonged to them. The shadow came back to Lincoln’s face, and he arose, slowly, painfully, like a man lifting some enormous burden. He even seemed to stagger as he walked out, for not only are each day’s burdens heavy, but the worst news of the war has thus far been its Sunday news and such as brings over Stanton in person.3

Mr. Lincoln called his youngest assistant “John” rather than by his last name. Mr. Lincoln had known Hay’s father, Dr. Charles Hay, his grandfather, merchant John Hay, and his uncle, lawyer Milton Hay. Hay was only a few years older than Mr. Lincoln’s son, Robert and like him the product of a New England college – in Hay’s case, Brown University. His humor, his loving of learning and good writing, and his moodiness matched President Lincoln’s character. Historian Michael Burlingame has observed that the relationship between Mr. Lincoln and Hay was that of father and son. Sharing that conclusion, he noted were two “recent scholars [who] have maintained that ‘John Hay’s relationship with Abraham Lincoln was a paramount influence over his life. For Hay, Lincoln proved to be a father figure who combined the values and personalities of both John’s father and uncle.'”4

Because he and John Nicolay both lived in the White House, Hay was privy to many insights in President Lincoln – many of which he recorded in letters or his diary. Hay also recorded some in anonymous reports he wrote for northern newspapers under the pen name “Ecarte.” In December 1861, he penned an analysis of the President and his relationship to Secretary of War Edwin Stanton:

Whatever may be the impression entertained generally of the mental characteristics of Mr. Lincoln, one fact begins to be displayed most strikingly in every important act of his official career. His strong common sense guards him from all extravagances, and his wonderful intuitive knowledge of the feeling and wish of the people is at once the cause and justification of the fullest public confidence. It is derived from many sources: his humble origin and early struggles – his daily intercourse with all classes in the laborious pursuit of his profession – his purity of purpose and earnest democracy of sentiment. With none of the ordinary arts of moulding public opinion, with no attention to newspapers as the organs of popular feeling, he is always inevitably en rapport with the mind of the country, and when he differs with the louder and more clamorous pretenders to popular leadership, you always hear the deep, low murmur of approval coming up cordial and truthful from the heart of the people. It is this entire knowledge of, and harmony with the honest sentiment of the masses, that constitutes the liveliest hope for the future of his Administration.

This difference of opinion as to a question of expediency between the President and the Secretary of War involves nothing of personal feeling and no collision whatever of administrative policy. The surest indication of harmony in the Cabinet is the perfect freedom of discussion and liberty of criticism that seems to prevail in their councils. They are so entirely united and singled-hearted in the prosecution of this business to the end, that they are careless of seeming so. There has not been a period since the Fourth of March, when it was possible to predict how the Cabinet would divide upon any anticipated question of public policy.5

Hay’s diary was a more valuable record of his interactions with and impressions of President Lincoln. On July 31, 1863, Hay wrote: “I had a considerable talk with the President this evening on this subject [of emancipation and reconstruction]. It deeply interests him now. He considers it the great question ever presented to practical statemanship.” Hay wrote then crossed off the following sentence: “While the rest are grinding their little private organs for their own glorification the old man is working with the strength of a giant and the purity of an angel to do this great work.”

Two months later, Hay’s diary indicated the intimacy of their living arrangements and the confidence President Lincoln placed his aide. “Sunday morning, the 20th of September the President showed me [William S.] Rosecrans despatch of the day before detailing the first day’s fighting & promising a complete victory on the next day. The Presdt. was a little uneasy over the promise, and very uneasy that [Ambrose] Burnside was not within supporting distance,” wrote Hay. “The next morning he came into my bedroom before I was up, & sitting down on my bed said ‘Well, Rosecrans has been whipped, as I feared. I have feared it for several days. I believe I feel trouble in the air before it comes. Rosecrans says we have met with a serious disaster – extent not ascertained. Burnside instead of obeying the orders which were given him on the 14th & going to Rosecrans has gone up on a foolish affair to Jonesboro to capture a party of guerrillas who are there.'”6

Hay went with the President on trips in and around Washington as well. He often accompanied Mr. Lincoln to the theater. In December 1863, he went with Mr. Lincoln, John G. Nicolay and Leonard Swett “To Fords [Theater] with him to see Falstaff in Henry IV. Dixon came in after a while. Hackett was most admirable. The President criticised H’s reading of a passage where Hackett said, ‘Mainly thrust at me’ the President thinking it should read ‘mainly thrust at me.’ I told the Presdt. I th’t he was wrong, that ‘mainly’ merely meant ‘strongly’ ‘fiercely.'”7

Hay was sent to Florida in February 1864 to observe whether military and political conditions there were conducive to reconstruction. In late December, Hay recorded in his diary: “Talked with the President about the matter of the reconstruction of Florida. He wants me to take one of his Oath books down to Pt. Lookout and get the matter going there and after that he will appoint me a Commissioner to go to Florida and engineer the business there. But their meeting at St. Augustine the other day there seems a prospect of getting the state under way early next Spring. I will go down & form my plans after I get there, as to my own course.”8

Hay was much annoyed at some of the press coverage of his trip. A report in the New York Herald criticized “a curious development of Executive intermeddling with military movements” The Herald reported “it is rumored that the expedition was intended simply for the occupation of Florida for the purpose of securing the election of three Lincoln delegates to the National Nominating Convention, and that of John Hay to Congress.”9 When Hay returned in March, he had breakfast with the President almost immediately. “There was no special necessity of presenting my papers as I found he thoroughly understood the state of affairs in Florida and did not seem in the least annoyed by the newspaper falsehoods about the matter.”10

For his boss, Hay had perpetual admiration. After President Lincoln’s murder, Hay wrote: “I consider Lincoln Republicanism incarnate – with all its faults and all its virtues. As in spite of some rudenesses, Republicans is the sole hope of a sick world, so Lincoln with all his foibles, is the greatest character since Christ.”11 Several decades later, Hay recalled President Lincoln’s fondness for reading from Shakespeare’s Richard the Second: “The terrible outburst of grief and despair into which Richard falls in the third act had a particular fascination for him. I have heard him read it at Springfield, at the White House, and at the Soldiers Home.

For heaven’s sake, let us sit upon the ground,
And tell sad stories of the death of kings: –
How some have been deposed, some slain in war,
Some haunted by the ghosts they have deposed;
Some poisoned by their wives, some sleeping killed;
All murdered: – for within the hollow crown
That rounds the mortal templmes of a king
Keeps Death his court; and there the antic sits,
Scoffing his state, and grinning at his pomp, –
Allowing him a breath, a little scene
To monarchize, be feared, and kill with looks;
Infusing him with self and vain conceit, –

As if this flesh, which walls about our life,
Were brass impregnable, – and humored thus,
Comes at the last, and with a little pin
Bores through his castle walls and – farewell, King!12