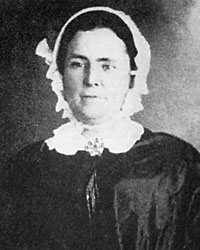 Mr. Lincoln had boarded with Bowling Green while building his flatboat for Dennis Offutt. Since Green lived near the Abell farm, Mr. Lincoln came to know Mrs. Elizabeth Abell. When he started surveying the Petersburg area, he stayed at their farm and the Abells’ son helped him with the surveying chain. Elizabeth recalled that “when Lincoln would come in at night all ragged and scratch up with the Bryers he would laugh over it and say that was a poore mans lot.” Like Hannah Armstrong, she claimed she “foxed” his pants with buckskin to protect him from the briars and undergrowth.”1

“She evidently liked Lincoln, his genial manner and disposition to make himself agreeable,” recalled William Butler. “By and by Lincoln began to board at Able’s. And my opinion is it was from Mrs Able he first got his ideas of a higher plane of life – that it was she who gave him the notion that might improve himself by reading.” Butler said Mr. Lincoln “lived there off and on until he came to Springfield.”2

Elizabeth Abell first met Mr. Lincoln at her cabin in October 1833. She described Mr. Lincoln as “always social and lively…and good natured.”3 According to her, Mr. Lincoln “was neither eccentric or visionary, he was very sensitive and backward nothing rash about him.” She also said he was “the best natured man I ever got acquainted with.” Elizabeth herself came from a wealthy Kentucky family. Her sister Mary herself described their father as a “gentleman of considerable means, and I am persuaded that few persons placed a higher estimation on education than he did.”4

Elizabeth watched Mr. Lincoln court and mourn neighbor Anne Rutledge. “I never seen a man mourn for a companion more than he did for her.”5 Mr. Lincoln told her one rainy day that he could not bear the thought of rain falling on Anne’ grave. Mr. Lincoln’s next serious female relationship was with Elizabeth’s sister Mary, whom Mrs. Abell was very interested in matching with Mr. Lincoln.

New Salem resident Mentor Graham described Mary Owens as “a very intellectual woman – well educated.” Her cousin Johnson Gaines Greene said she was “an intellectual woman – the most intellectual woman I Ever Saw – She had a fine Education.”6 Graham said “Her Mind was better cultivated than Miss Rutledge.” According to Graham she was good-natured, “free and social”, “gay and lively.”7 Another New Salem resident, Lynn. M. Greene, who married the daughter of Elizabeth Abell, described Mary as “jovial social loved wit & humor – had a liberal English education & was considered wealthy.”8 Her son described her as “a good conversationalist and a splendid reader, but very few persons being found to equal her in this accomplishment.”9

Mr. Lincoln joked later that he had promised that if Elizabeth’s sister would visit New Salem again, he would marry her. “She left her Kentucky home with a predetermination to show him, if she met him, that she was not to be caught simply by the asking,” wrote Mary’s son, Benjamin R. Vineyard. “On this second visit Lincoln paid her more marked attention than ever before, and his affections became more and more enlisted in her behalf,” he wrote10 Both parties realized that their affection fell something short of eternal love. “In speaking of him in after years she always referred to him as a man with a heart full of human kindness and a head full of Common Sense,” said Vineyard.11 Mr. Lincoln himself recorded the history of his relationship to Elizabeth Abell and Mary Owens in a letter to Eliza Caldwell Browning in April 1838:

It was, then, in the autumn of 1834, that a married lady of my acquaintance, and who was a great friend of mine, being about to pay a visit to her father and other relatives residing in Kentucky, proposed to me, that on her return she would bring a sister of hers with her, upon condition that I would engage to become her brother-in-law with all convenient dispatch – I, of course, accepted the proposal; for you know I could not have done otherwise, had I really been averse to it; but privately between you and me, I was most confoundedly well pleased with the project – I had seen the said sister some three years before, thought her intelligent and agreeable, and saw no good objection to plodding life through hand in hand with her – Time passed on, the lady took her journey and in due time returned, sister in company sure enough – This stomached me a little; for it appeared to me, that her coming so readily showed that she was a trifle too willing; but on reflection it occurred to me, that she might have been prevailed on by her married sister to come, without any thing concerning me ever having been mentioned to her; and so I concluded that if no other objection presented itself, I would consent to wave this -All this occurred upon my hearing of her arrival in the neighborhood; for, be remembered, I had not yet seen her, except about three years previous, as before mentioned-12

Mr. Lincoln complained that Mary’s appearance had changed between her two visits and she had put on considerable weight. “But what could I do?” Mr. Lincoln confided in Eliza Browning. “I had told her sister that I would take her for better or for worse; and I made a point of honor and conscience in all things, to stick to my word, especially if others had been induced to act on it, which in this case I doubted not they had, for I was now fairly convinced that no other man on earth would have her, and hence the conclusion that they were bent on holding me to my bargain – Well, thought I, I have said it, and, be consequences what they may, it shall not be my fault if I fail to do it – At once I determined to consider her my wife; and this done, all my powers of discovery were put to the rack, in search of perfections in her, which might be fairly set-off, against her defects.”13

Mr. Lincoln wasn’t the only one with romantic doubts. Mary Owens Vineyard later admitted to William Herndon: “I think I did on one occasion say to my sister, who was very anxious for us to be married, that I thought Mr. Lincoln was deficient in those little links which make up the great chain of womans happiness.”14 She cited as evidence a horseback ride to “Uncle Billy Greens, Mr. L. was riding with me, and we had a very bad branch to cross, the other gentlemen were very officious in seeing that their partners got over safely; we were behind, he riding in never looking back to see how I got along; when I rode up beside him, I remarked, you are a nice fellow; I suppose you did not care whether my neck was broken or not. He laughingly replied, (I suppose by way of compliment) that he knew I was plenty smart to take care of myself.”15

She herself tried to “bend” Mr. Lincoln to test his “love,” according to her cousin Johnson Gaines Greene. One day, when she learned from a messenger boy that Mr Lincoln was coming to the Abell’s farm to see her, Mary deliberately went instead to Mentor Graham’s house. Mr. Lincoln arrived, sat for a while and then went back to New Salem but did not go to the Graham house. “The fat was now in the fire. Lincoln thought that as he was Extremely poor and Miss Owens very rich that it was a fling on him on that account,” recalled Greene16

Mr. Lincoln wrote Mary in December 1836 from Vandalia about his illness and legislative affairs. Lincoln concluded: “Write back as soon as you get this, and if possible, say something that will please me, for really I have not been pleased since I left you. This letter is so dry and stupid that I am ashamed to send it, but with my present feelings I can not do any better. Give my best respects to Mr. and Mrs. Abell and family.” He began the letter on a cryptic note:

I have been sick ever since my arrival here, or I should have written sooner. It is but little difference, however, as I have very little even yet to write. And more, the longer I can avoid the mortification of looking in the Post Office for your letter and not finding it, the better. You see I am mad about the old letter yet. I don’t like very well to risk you again. I’ll try you once more any how.17

Subsequent letters to Mary Owens in 1837 did not reveal a more settled state of mind. Lincoln wrote her in May 1837: “I am often thinking about what we said of your coming to live at Springfield. I am afraid you would not be satisfied. There is a great deal of flourishing about in carriages here; which it would be your doom to see without sharing in it. You would have to be poor without the means of hiding your poverty. Do you believe you could bear that patiently? Whatever woman may cast her lot with mine, should any ever do so, it is my intention to do all in my power to make her happy and contented; and there, is nothing I can imagine, that would make me more unhappy than to fail in the effort. I know I should be much happier with you than the way I am, provided I saw no signs of discontent in you. What you have said to me may have been in jest, or I may have misunderstood it. If so, then let it be forgotten; if otherwise, I much wish you would think seriously before you decide. For my part I have already decided. What I have said I will most positively abide by, provided you wish it. My opinion is, that you had better not do it. You have not been accustomed to hardship, and it may be more severe than you now imagine.” Mr. Lincoln concluded the letter with another reference to Elizabeth Abell: “Tell your sister I dont want to hear any more about selling out and moving. That gives me the hypo whenever I think of it.”18

Mrs. Abell later wrote that Mr. Lincoln wanted Mary Owns “to consider and reconsider it that he was poore.” She added “what man on earth would have done such a thing but Abraham Lincoln he was two honest a man for this world.”19 Mary Owens left New Salem in late 1838 and ceased any correspondence with Mr. Lincoln. Although some of his letters to her survive, none of those from her to Mr. Lincoln do. She married Jesse Vineyard about 1842 and moved to Missouri. Her sons joined the Confederate army.