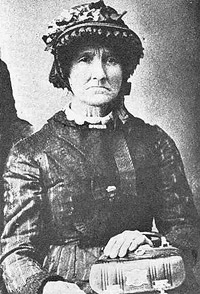 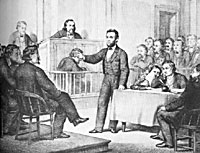 Hannah Armstrong said she met Mr. Lincoln shortly after the first of one of her children was born. “Abe would Come out to our house – drink milk & mush – Corn bred – butter – bring the Children candy,” she told William Herndon. Sometimes, he stayed and rocked the cradle of William “Duff” Armstrong.1 Lincoln was a regular visitor at the house – amusing babies, telling stories, attending parties.

After Mr. Lincoln completed his first surveying job in 1834, Hannah turned the two buckskins that he received as payment into pantaloons for use in his work. Hannah had married Jack Armstrong (1804-1854), one of the Clary Boys who challenged Mr. Lincoln (to a wrestling match) and then looked up to Lincoln when he first came to New Salem. Jack Armstrong also served as a sergeant under Captain Lincoln in the Black Hawk War.

Mr. Lincoln successfully defended her son, Duff against charges of murder in 1858 – just a year after her husband had died. It was the same son Mr Lincoln had helped rock to sleep after he was born in 1833. Mr. Lincoln wrote “Aunt Hannah” in September 1857: “I have just heard of your deep afliction, and the arrest of your son for murder. I can hardly believe he can be capable of the crime alleged against him. It does not seem possible. I am anxious that he should be given a fair trial at any rate; and gratitude for your long-continued kindness to me in adverse circumstances prompts me to offer my humble services gratuitously in his behalf. It will afford me an opportunity to requite, in a small degree, the favors I received at your hand, and that of your lamented husband, when your roof afforded me a grateful shelter, without money and without price.”2

Journalist Walter B. Stevens interviewed Duff Armstrong about his trial and wrote “how Mr. Lincoln was brought into the case. His mother was know to the whole community as ‘Aunt Hannah.’ She had been kind to Lincoln when he lived in the Salem neighborhood. Local sentiment about the Metzgar affair was against Duff. The man who was indicted as accessory to the killing [James H. Norris’ had been given eight years in the penitentiary. In her distress, Aunt Hannah wrote to Mr. Lincoln who, at that time, had been living in Springfield a dozen or more years. Mr. Lincoln wrote back at once that he would defend Duff. He told Aunt Hannah to rely upon him. Nobody knew what the defense was to be, Duff said. But when the case came to trial, Lincoln was there. He questioned the witnesses for the prosecution very closely. There were two men who testified to the details of the fight. Mr. Lincoln had them describe the positions of the combatants when the slung-shot was used; and they made the circumstances look bad for Duff. Then he pressed them to know how they could testify so accurately and led them into positive statements about the moonlight. They described the moon as being about the height of the sun at ten in the morning. Mr. Lincoln returned to this again and again, and asked the witnesses if they were sure they were not mistaken. As often as the question was put, so often they committed themselves. They insisted the moon shining down upon the combatants made every movement plain to them.”3

One witness to the trial later recalled Mr. Lincoln’s summation to the jury: “He told of his kind feelings toward the Mother of the Prisoner, a widow, That she had been kind to him when he was young, lone & without friends. The last 15 minutes of his Speech, was as eloquent as I Ever heard, and Such the power, & earnestness with which he Spoke, that jury & all, Sat as if Entranced, & when he was through found relief in a gush of tears. I have never Seen, Such mastery Exhibited over the feelings and Emotions of men, as on that occasion.”4

Mrs. Armstrong recalled that Mr. Lincoln had said to her “Hannah Your son will be cleared before sun down.” She said, “I went down at Thompsons pasture” where she heard “that my Son was cleared – and a free man. I went up to the Court house – the Jury shook hands with me – so did the Court – so did Lincoln. We were all affected and tears streamed down Lincoln’s Eyes.” Then Mr. Lincoln said, “Hannah – What did I tell you.” He added: “I pray to God that W[illia]m may be a good boy hereafter – that this lesson may prove in the End a good lesson to him and to all.” That night, Mr. Lincoln delivered the first of his lecture on “Discoveries and Inventions.”5

When a family friend told Lincoln that he would get a fee for his work on the trial, Lincoln told him that “you ought to know me better than to think I’d take a fee from any of Jack Armstrong’s blood….Why, bless your soul, I’ve danced that boy on my knee a hundred times in the long winter nights by his father’s fire, down in old Howard. I wouldn’t be worthy to take your hand, Om, if I turned on him now. Go back and tell old Hannah to keep up a good heart, and we will see what can be done.”6
When Hannah asked Lincoln for a bill, Mr. Lincoln said: “Why – Hannah I shant charge you a cent – never. Any thing I can do for you I will do for you willingly & freely.” He later offered to defend her in Supreme Court from men who were trying to take away her land.7

Shortly before President-elect Lincoln left for Washington, Hannah came to Springfield to say good-bye. She recalled “the boys got up a story on me that I went to get to sleep with Abe.” She replied “that it was not every woman who had the good fortune & high honor of sleeping with a President. This stopt the sport – cut it short.” After they talked and she was about to say goodbye, she told Mr. Lincoln that she would never see him again and that he would be killed. Smiling, Mr. Lincoln said: “Hannah – if they Kill me I shall never die [another] death.”8

In 1863, three decades later after they first met, Mr. Lincoln heeded Hannah’s request that Duff be discharged from the Army because of illness. Hannah appealed for his discharge from an Army hospital, which the President granted. He sent her a telegram: “I have just ordered the discharge of your boy, William – as you say now at Louisville Ky.”9

New Salem James Short said, “She is a good woman – loved Abe and Abe liked her – no doubt of this.”10