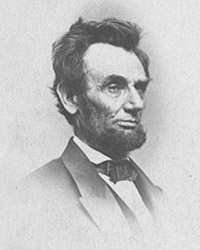 Friendship was politically important as well as personally important to Mr. Lincoln’s election to the presidency. Mr. Lincoln’s secretary, John G. Nicolay, wrote of the “pride which his old-time friends and neighbors felt in the rare good fortune that one of their own class had become a real presidential candidate and might become a real President of the United states – an elevation none the less impressive because they had heard it so often vaunted as the privilege and possibility of American school-boy…”1

When President-elect Lincoln departed Springfield, Illinois for Washington on February 11, 1861, he began his short farewell address by saying: “My friends. No one not in my position can appreciate the sadness I feel at this parting. To this people I owe all that I am. Here I have lived more than a quarter of a century; here my children were born, and here one of them lies buried. I now leave, not knowing when or whether every I may return….”2 It was almost exactly one year after a group of Mr. Lincoln’s legal and political friends had gathered at the State Capitol and plotted his candidacy.

Mr. Lincoln’s parting comments reflected his ties to the residents of Springfield. Springfield Republican leader Shelby M. Cullom later recalled: “I clasped hands with him at parting, and there passed between us a conversation which strengthened my determination to go to Congress. I was the newly elected Speaker of the Illinois House of Representatives, and Lincoln had just attained his title ‘Mr. President,’ which I took delight in using,” said Cullom in 1909. “‘Good-by-, Mr. President,’ said I, ‘I will be down in Washington with you one of these days.’ ‘Come on, Mr. Speaker,’ he replied. ‘I hope you will appear there soon.'”3 Sculptor Thomas D. Jones recalled: “The tearful eye, the tremulous lips and inaudible words was a scene never to be forgotten. When the crowd has passed him, I stepped up to say good-bye. He gave me both his hands – no words after that.”4

The previous day, Mr. Lincoln paid a final visit to the law office he shared with William H. Herndon: “I accompanied him downstairs,” recalled Herndon. “On the way he spoke of the unpleasant features surrounding the Presidential office. ‘I am sick of office-holding already,’ he complained, ‘and I shudder when I think of the tasks that are still ahead.’ He said the sorrow of parting from his old associates was deeper than most persons would imagine, but it was more marked in his case because of the feeling which had become irrepressible that he would never return alive. I argued against the thought, characterizing it as an illusory notion not in harmony or keeping with the popular ideal of a President. ‘But it is in keeping with my philosophy,’ was his quick retort. Our conversation was frequently broken in upon by the interruptions of passers-by, who, each in succession, seemed desirous of claiming his attention. At length he broke away from them all. Grasping my hand warmly and with a fervent ‘Good-bye,’ he disappeared down the street, and never came back to the office again.”5

Journalist Henry Villard asked Mr. Lincoln to write down his address after the train pulled away from Springfield. A few days earlier, Villard had filed a report for the New York Herald: “The close approach of the departure has rendered him unusually grave and reflective. Parting with this scene of joys and sorrows during the last thirty years and the large circle of old and faithful friends apparently saddens him and directs his thoughts to his cherished past rather than the uncertain future. His interviews with the most intimate of his friends are more frequent and affectionate and visits of strangers are not encouraged…”6 Mr. Lincoln generally avoided serious topics in his short speeches along the way to Washington, but “friend” was a frequent concept. In Pittsburgh, he asked: “What is there now to warrant the condition of affairs presented by our friends ‘over the river?'”7

In December 1860, Mr. Lincoln had written one of those friends over the river, Georgian Alexander Stephens, with whom Mr. Lincoln had served in Congress. He told Stephens, who soon would become vice president of the Confederacy: “Do the people of the South really entertain fears that a Republican administration would, directly, or indirectly, interfere with their slaves, or with them, about their slaves? If they do, I wish to assure you, as once a friend, and still, I hope, not an enemy, that there is no cause for such fears.”8 (Stephens reported that when he met with the President at Hampton Roads, Virginia, in February 1865, the President spoke to him as a friend. Mr. Lincoln arranged for Stephens’ nephew to be released from a Union prison in Ohio. Before leaving for the South, Mr. Lincoln asked young Stephens to stop by the White House. “I told your uncle I would send you to him, Lieutenant,” said the President. “You have the freedom of the city as long as you please to remain here.”)9

Mr. Lincoln used similar language when he closed his first Inaugural Address on March 4, 1861: “We are not enemies, but friends. We must not be enemies. Through passion may have strained, it must not break our bonds of affection. The mystic chords of memory, stretching from every battle-field, and patriot grave, to every living heart and hearthstone, all over this broad land, will yet swell the chorus of the Union, when again touched, as surely they will be, by the better angels of our nature.”

Friendship was a virtue that Mr. Lincoln did not abandon on the way to Washington any more than he abandoned his anti-slavery principles. “If you visited Lincoln, he never wearied
you with dreary politics or heavy theories, or glorified himself or his doings. In every crisis he sought the advice, not of his enemies, but of his friends,” wrote Philadelphia editor and politician John W. Forney.10 Mr. Lincoln had a special ability to put people at ease. Even a critic like Englishman George Borrett observed after visiting with President that “a much more pleasant [visit] than I ever had with any other potentate.”

Few things gave Mr. Lincoln greater pleasure as President than the appearance of an old Illinois acquaintance. U.S. Marshal Ward Hill Lamon recalled: “At about the time of his third [White House] reception he had on a tight-fitting pair of white kids, which he had with difficulty got on. He saw approaching in the distance an old Illinois friend named Simpson, whom he welcomed with a genuine Sangamon County shake, which resulted in bursting his white-kid glove with an audible sound. Then raising his brawny hand up before him, looking at it with an indescribable expression, he said, – while the whole procession was checked, witnessing this scene, – ‘Well, my old friend, this is a general bustification. You and I were never intended to wear these things. If they were stronger they might do well enough to keep out the cold, but they are a failure to shake hands with between old friends like us. Stand aside, Captain, and I’ll see you shortly.'”11

“In the fall of’64 I was in Washington, and went to see Mr. Lincoln,” reported Thomas W. S. Kidd, who was the court crier for the federal court in Springfield. “Time had made some inroads on his physical, but none that I could discover on his social nature. He could shake the hand just as heartily; had the same pleasant prepossessing smile of friendship. Cares of state, war with its terrible responsibilities, the fluctuating fruits of victory and defeat weighing constantly for four years on his mind, had sympathetically added a few more wrinkles to his face and given his body more a stoopy tendency than when I last gazed on him; but no change in the warmth of his grasp; none in regard for his friend, the Crier.”12

The joy such visits brought President Lincoln was widely observed. “There is something very beautiful and touching in the attachment and fidelity of these old Illinois comrades to Lincoln. They had all been pioneers, frontiersmen, circuit-riders together. They were never so happy as when talking over old times, and recalling the rough experiences of their early lives,” wrote biographer Isaac N. Arnold, who represented Chicago in Congress during the Civil War.13 White House guard Thomas Pendel wrote:

One day a number of persons were shown into his office, and among them an old personal friend from Illinois. He at once came up to Mr. Lincoln, shook hands with him and said, ‘Why, Mr. President, you look just about as you did when you were out in Illinois.’ Here was an opportunity for the man to forget affairs of state and relax from business cares and the burdens, which at that time were bearing heavily upon him. The President said, “Yes, I am about the same, and that puts me in mind of an old farmer out in Illinois who had an old horse which he put in pasture to recuperate. After the horse had grazed in the pasture some time, one of the neighbors came along and remarked to the owner of the old horse, ‘Well, you put this horse in here to recuperate, but he looks just about the same as when you first put him in here. He neither recupes nor decupes.’ And,’ added Mr. Lincoln, ‘that just about the way it is with me.’ The two friends then had a very hearty laugh.”14

Historian Carl Sandburg recounted the story of an old Illinois farm couple who came to Washington. In the middle of a fancy White House reception, just as an English nobleman had been presented to the President, “Lincoln’s glance happened to sweep over and beyond those nearest him till his eye caught the old couple, and he blurted, ‘Excuse me, my lord, there’s an old friend of mine.’ Making way toward them, he took the old farmer’s hand: ‘Why, John, I’m glad to see you! I haven’t seen you since you and I made rails for old Mrs. So-and-So in Sangamon County.'” In response, the old farmer said, “Mother, he’s just the same old Abe!”15

Meeting friends gave President Lincoln energy. During a particularly difficult meting with one of the warring factions in Missouri, one participant, Enos Clark, noted: “Mr. Lincoln had met some personal acquaintances with whom he was exchanging pleasantries, and instead of the tears of a few moments before, he was indulging in hearty laughter. This rapid and wonderful transition from one extreme to the other impressed me greatly.”16

Sometimes, the visitors had to wait for the President, but eventually he made time for them. Thomas Lewis, an elder of the First Presbyterian Church in Springfield where the Lincolns worshiped in Springfield, visited Washington in 1862. He went to the White House at night, having learned that he could not be received during the day. “You see the fix I am in. I am kept here every night until nine to twelve o’clock, and never know when I can leave. You go to Mary’s room and visit her until I come. It will be between nine and twelve o’clock. Then we will talk Springfield over.” Mr. Lincoln finally came in at 11 and spent three hours with his Illinois visitor.17