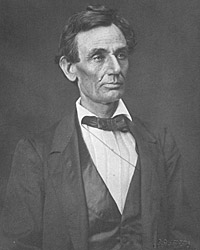 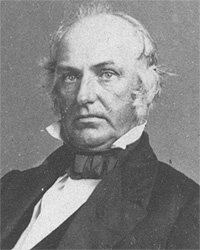 The importance of friends was perhaps never so evident as when Mr. Lincoln sought the Whig nomination for Congress in 1843. He had been associated – personally and by marriage – with a group of Springfield Whigs known as the “Junto.” Many Whigs chafed under these influence and control – and held their “aristocratic” airs against Mr. Lincoln’s congressional candidacy. On March 26, 1843, he wrote Martin S. Morris: “Your letter of the 23rd. was received on yesterday morning, and for which (instead of an excuse which you thought proper to ask) I tender you my sincere thanks. It is truly gratifying to me to learn that while the people of Sangamon have cast me off, my friends of Menard who have known me longest and best of any, still retain there confidence in me. It would astonish if not amuse, the older citizens of your County who twelve years ago knew me a strange[r], friendless, uneducated, penniless boy, working on a flat boat – at ten dollars per month to learn that I have been put down here as the candidate of pride, wealth, and aristocratic family distinction. Yet so chiefly it was.”1

Mr. Lincoln competed with two friends, both attorneys, for the Whig nomination. They were many similarities among them. “All three men were young: Lincoln thirty-four, Hardin thirty-three, and Baker thirty-two,” wrote Lincoln biographer Benjamin Thomas. “All were able lawyers and veterans of the Black Hawk War. Each had served in the Legislature, and Baker was then a state senator. All were capable speakers and good campaigners; Hardin, though handicapped by a slight speech impediment, spoke as logically and convincingly as Lincoln, and Baker was unexcelled as an orator of the flag-waving, spread-eagle type.”2

Mr. Lincoln was closer to Edward D. Baker than he was to John J. Hardin but that closeness itself caused problems. Mr. Lincoln was placed in a difficult situation when the Sangamon County Whigs endorsed Baker and then placed Mr. Lincoln on his home county delegation. Mr. Lincoln wrote Joshua Speed: “The meeting, in spite of my attempt to decline it, appointed me one of the delegates, so that in getting Baker the nomination, I shall be ‘fixed’ a good deal like a fellow who is made groomsman to the man what has cut him out, and is marrying his own dear ‘gal.'”3

Hardin had a geographic advantage, recalled Illinois editor Thomas Pickett. “The Whigs of Morgan unanimously agreed to put forward Hardin, but those of Sangamon were divided between Baker and Lincoln. To settle the matter a vote of the Whigs of the county was taken and Baker was victorious by four majority. It was then arranged that Lincoln should lead the Baker delegation to the district convention.”4

Mr. Lincoln tried to be true to his principles and still pursue the nomination – despite intrigue and rumors of intrigue – some of its involving his friend Baker. On April 14, Mr. Lincoln wrote Martin S. Morris: “I have heard it insinuated that Baker has been attempting to get you or Miles or both of you to violate the instructions of the meeting that appointed you, and go for him. I have insisted, and still insist, that this can not be true. Surely Baker would not do the like. As well might Hardin ask me to vote for him, in the convention.”

Mr. Lincoln continued his letter to “Friend Morris”: “Again, it is said there will be an attempt to get up instructions in your county, requiring you to go for Baker. This is all wrong again. Upon the same rule, why might not I fly from the decision against me in Sangamon and get up instructions to their delegation to go for me. There are at least twelve hundred whigs in the county, that took no part. And yet I would as soon put my head in the fire as to attempt it. I should feel myself strongly dishonored by it.

Mr. Lincoln concluded: “Besides, if any one should get the nomination by such extraordinary means, all harmony in the district would inevitably be lost. Honest whigs (and very nearly all of them are honest) will not quietly abide such enormities. I repeat, such an attempt on Baker’s part can not be true. Write, me at Springfield, how this matter is. Don’t show or speak of this letter.”5

The congressional district’s Whig convention was held in Pekin on May 1, 1843. By this time, Mr. Lincoln had backed away from the contest rather than betray Baker. “Hardin got all the Southern Counties in the District & Baker got all the North of the District,” recalled George U. Miles. “Many Counties were instructed for Lincoln & Could have beaten both Candidates.”6

“Baker was greatly mortified with the unexpected termination of the contest, and Lincoln – who had been his rival at home – arose and moved that the next congressional convention to meet two years from that time, should be requested to nominated E.D. Baker, of Sangamon,” wrote newspaper editor Thomas Pickett.” The Morgan delegation objected that the resolution was introducing the most objectionable feature of Jacksonism into Whig policy, and Lincoln’s resolution was laid on the table. The act of Mr. Lincoln in endeavoring to secure the nomination and advancement of his county rival was unselfish and noble.”7

Mr. Lincoln wrote Joshua Speed after the Whig nominating convention: “In relation to our congress matter here, you were right in supposing I would support the nominee. Neither Baker or I, however is the man; but Hardin. So far as I can judge from present appearances, we shall have no split or trouble about the matter; all will be harmony.”8 Indeed, it was Mr. Lincoln who withdrew Baker’s name from consideration but also Mr. Lincoln who moved that Baker be favored for the next congressional nomination. That same day, Mr. Lincoln wrote a letter to “Friend Hardin”:

[William] Butler informs me that he received a letter from you, in which you expressed some doubt whether the whigs of Sangamon will support you cordially. You may, at once, dismiss all fears on that subject. We have already resolved to make a particular effort to give you the very largest majority possible in our county. From this, no whig of the county dissents. We have many objects for doing it. We make it a matter of honor and pride to do it; we do it, because we love the whig cause; we do it, because we like you personally; and last, we wish to convince you, that we do not bear that hatred to Morgan county, that you people have so long seemed to imagine. You will see by the journal of this week, that we propose, upon pain of losing a Barbecue, to give you twice as great a majority in this county as you shall receive in your own. I got up the proposal.
Who of the five appointed, is to write the District address? I did the labor of writing one address this year; and got thunder for my reward. Nothing new here.9

Mr. Lincoln’s failure to receive the 1843 nomination to Congress would place him in conflict with friends. But Mr. Lincoln remained particularly grateful to those who supported him – and laid the ground-work for rotation of the congressional nomination that Mr. Lincoln would himself win at an 1846 convention. “While Lincoln willingly subordinated his own ambitions to party harmony, he had no intention of remaining permanently in the background,” wrote biographer Thomas. “What he had in mind was to establish a principle of rotation in office, whereby Baker would succeed Hardin after one term and Lincoln would succeed Baker in 1846.”10