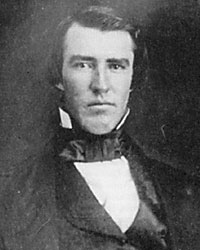 “There was a big fellow named Jack Armstrong, strong as a Russian bear, that I could not put down; nor could he get me on the ground,” Mr. Lincoln once recalled.1 “I suppose you have heard of Lincoln’s wrestling match with Jack Armstrong. I saw part of that. [Jack] Armstrong was one of the Clary Grove gang and it was their habit to initiate newcomers into town. Lincoln was tall, ungainly, awkward, and was bantered by this crowd,” recalled New Salem resident Daniel Green Burner. “These fellows would come into New Salem, get drunk, and would handle a novice roughly. Lincoln finally wagered Armstrong $10 that he could find a man who could throw him. The challenge was accepted and the next Saturday was set for the time. When the Armstrong gang arrived Lincoln told them that his man had not yet come. They waited around and became impatient and finally Armstrong demanded of Lincoln the $10. Lincoln replied:’Look here, Jack, my man isn’t here yet, but rather than lose that $10 I will wrestle with you myself.'”

Burner continued: “They went at it, and Lincoln just fooled with Armstrong until he had tired him completely out. Then he swung his long leg over Armstrong’s neck and made Armstrong run around holding him up in that position. Jack finally begged off, admitting he was beaten and offered Lincoln the $10, which Lincoln refused to take. The two were ever afterward warm friends. I saw all the last part of this match, and it was highly amusing. The story about Lincoln rubbing smartweed in his face is untrue.”2

There are many versions of what actually happened that day – most without any smartweed. The Clary’s Grove Boys “thought that had found only another subject by which this band could display its strength and prowess,” observed John T. Stuart, who was Mr. Lincoln’s mentor and first law partner. “The champion of the clan, Jack Armstrong was selected to wrestle with Lincoln and to show him that although six feet three he was no man at all compared with the ‘Boys.’ It did not take Jack long to discover that he had got hold of the wrong customer; and when it was evident that Lincoln was getting the better of their champion the whole Band pitched in and gave Lincoln several blows which had no very salutary effect on the strength of his legs. Lincoln however took all this in perfect good humor and by laughing and joking displayed such an excellent disposition that he at once won their hearts and was invited to become one of the company. This was the turning point in Lincoln’s life.”3

Different versions of the story make Armstrong rather than Mr. Lincoln the winner – under sometimes questionable circumstances. Historian Douglas L. Wilson wrote: “Though not the technical winner of the match, Abraham Lincoln came away with other prizes. He acquitted himself well in the eyes of the community at large. He made a friend of Armstrong and established himself as a favorite with the rough-and-ready crowd in the neighborhood of New Salem. Armstrong’s friendship came to mean much, including a family with whom to lodge from time to time and someone, in Hannah Armstrong, to launder and mend his clothes. The goodwill of the Clary’s Grove boys earned him the captainship of the local militia unit and a first taste of leadership when, some months later, he was summoned to duty in the Black Hawk War. In addition to being captain of their company, Lincoln distinguished himself by upholding their honor in the obligatory wrestling matches that enlivened the long and largely uneventful bivouacs of the volunteers.”4

“After this wresting match Jack Armstrong and his crowd became the warmest friends and staunchest supporters of Mr Lincoln,” recalled New Salem resident Robert B. Rutledge.5 Rial Clary, another New Salem resident who witnessed the fight said that the two were henceforth “the warmest friends.”6 Contemporary biographer William O. Stoddard wrote: “The episode was full of important consequences to Abraham Lincoln. His courage and prowess had been thoroughly tested and had made a deep impression upon the minds of his rough neighbors. He was in no danger of further challengers from any of them, and Jack Armstrong avowed himself the fast friend of the man who had given him so good a shaking. The further results were only a question of time, for the wrestling match which was not won by either of the contestants gained for Abe Lincoln a strong and devoted, if somewhat turbulent, constituency.”7

New Salem chronicler Thomas Reep described the Clary’s Grove Boys as “men standing upon their own feet, four-square with the world, as ready for a fight as a frolic, quick to discern streaks of yellow in men and as quick to discover and respect manhood and courage. Their virtues were many. Warm hearted and sympathetic to a fault, they ministered bountifully to every case of genuine suffering. They were always ready to lend a helping hand to a friend or neighbor, and they would share their last crust with anyone more needy than they. They hated sham and pretention and would not endure hypocrisy. They were great souled, courageous men, yet to one in distress they were as sympathetic and tender-hearted as a woman.”8

Mr. Lincoln fit in with them – but not completely. New Salem resident Daniel Green Burner wrote: “Lincoln was as full of fun as a dog is of fleas, and yet he was not guilty of mean tricks. I never knew him to perform one. He had no part in the rowdyism of the Clary Grove gang. They had queer notions of fun. I remember that one evening this crowd came in and got gloriously drunk. What did they do but thrust a helpless, drunken old man into a hogshead, nail on the cover, and then started the hogshead rolling down the steep hill toward the mill. Fortunately, part way down the big barrel struck a stump and was broken to pieces, releasing the captive. But for this accident the victim would probably have been drowned in the river. Lincoln would stoop to no such performance as this. On another occasion this same crowd called up an old man with a wooden leg and made him a prisoner. They then built a fire around the wooden leg, and held the man there until the wooden leg was consumed.”9

Mr. Lincoln later told a friend that the “Clary boys intended to whip [him] & run him off.” His performance in the wrestling match, regardless of the details, convinced these rowdies to make him instead their firm friend. Although the Armstrong wrestling match was the story that joined the canon of the Lincoln legend, there were many other stories told by Mr. Lincoln’s contemporaries about his relationship with Armstrong – just as there are many other stories about Mr. Lincoln’s skill as a wrestler. Johnson Gaines Greene recalled a dispute that Armstrong had gotten into in which he called another man “a liar – a son of a bitch – coward”. The man struck Armstrong with a stick and knocked him down. Armstrong, who was “as strong as 2 men”, wanted to beat the man in retaliation. “At last they agreed to Compromise the Matter – Made Abe arbitrator – Abe said – ‘Well Jack what did you say to the man.” After Armstrong repeated what he said, Mr. Lincoln said, “Jack if you were a stranger in a strange place as this man is, and you were called a d-d liar &c – What would you do”? Armstrong replied “hit by God.” Mr. Lincoln then advised that “this man has done no more to you than you would have done to him.” Mollified, Armstrong said, “Well Abe…Its’ all right.” Armstrong then shook the man’s hand and forgave him.10

Abner Ellis told the story about an old drunk who complained to Armstrong and Mr. Lincoln that he had out lived all of his friends – claiming that his one friend was “in this Jug” as he took a swig. Jack Armstrong said: “Look hear old feller if you don’t quit drinking you will Not Live to see Christmas.” The bet was consummated with Mr. Lincoln as the witness; Armstrong lost and paid off with 50 bushels of corn.11

Mr. Lincoln was a frequent visitor to the Armstrong home. He occasionally slept in there, chopped wood, hauled water, ate his meals and cared for William “Duff” Armstrong as a baby. The Armstrongs later moved north a farm in the Petersburg area. “The Armstrong sons, though rough-mannered and given to drink and boisterous horseplay, were all hardworking farmers and law-abiding citizens,” wrote John Evangelist Walsh.12

After the death of “Old Snag,” Mr. Lincoln was called upon by his widow to defend her son William, who had been accused of murdering James P. Metzger. It was said to be Jack’s dying wish that William be saved by hiring the best possible lawyer – possibly Mr. Lincoln.13 Assistant prosecuting counsel J. Henry Shaw said he “was very much surprised…to see the immense interest [Mr. Lincoln] took in the Armstrong Case. He went into it like a Giant. The evidence bore heavily upon his client.”14 A key and controversial point in the trial was Mr. Lincoln’s use of an almanac to prove that a key witness could not have seen what he said he saw on the moonless night of the murder.

Mr. Lincoln’s speech to the jury was a real tear-jerker. Shaw later wrote that young Duff “Armstrong was not cleared by any want of testimony against him, but by the irresistable appeal of Mr. Lincoln in his favor. He told the jury of his once being a poor, friendless boy; that Armstrong’s father took him into his house, fed and clothed him & gave him a home &c. the particulars of which were told so pathetically that the jury forgot the guilt of the boy in their admiration of the father.”15

In another letter, Shaw wrote that Mr. Lincoln “took the jury by storm. There were tears in Mr. Lincoln’s eyes while he spoke. But they were genuine. His sympathies were fully enlisted in favor of the young man, and his terrible sincerity could not help but arouse the same passion in the jury. I have said it a hundred times, that it was Lincoln’s speech that saved that criminal from the Gallows, and neither money or fame inspired that speech, but it was incited by gratitude to the young man’s father, who, as Mr Lincoln said ‘was his only friend when he was a poor homeless boy.'”16