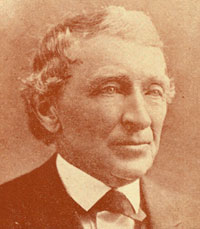 Jesse W. Fell, who played a critical role at several junctures of Mr. Lincoln’s political suggested Lincoln-Douglas debates in 1854. Speaking to Mr. Lincoln just before Senator Stephen A. Douglas spoke in Bloomington, Mr. Lincoln maintained that Douglas would not cooperate in such a scheme. “I fully appreciate all you say about our country friends and would like mighty well to talk them on this subject. If Judge Douglas will give me a chance I will follow him out in the grove, but as he won’t do this, I guess you may give it out, after he is done, that I will reply to him after candle lighting in the court house.”1

Fell was a dynamo – in business, law, real estate, journalism, horticulture and education. Fell was a tree-planter, trader, university founder (Illinois State Normal University) and developer with railroad connections and anti-slavery sympathies. Fell was not only a good lawyer but an eloquent speaker. He was a Pennsylvania native who had studied law in Ohio. Although he had founded Bloomington Pantagraph, his primary occupation was real estate. He met Mr. Lincoln in 1834 while he was still engaged in the practice of law. He was sometimes rich and sometimes poor, having been bankrupted in 1837. He remained a strong and persistent advocate for his views. Fell’s persistence was recalled by a Bloomington story of him meeting Mr. Lincoln at Judge Davis’s office one day: “Oh, here’s Fell again. No, I can’t do it. But it’s no use to talk; you’ll have me before you go away.”2 Fell began pushing for a debate between Mr. Lincoln and Stephen Douglas in 1854. “Mr. Fell never gave up the idea of having a joint debate between Lincoln and Douglas. He continued to agitate it until four years afterward it occurred in the contest for the senatorship. I think Mr. Fell, more than anybody else, is entitled to the credit of bringing about the seven joint debates in 1858,” recalled James S. Ewing of his Bloomington boyhood.3

But whatever his financial situation, Fell always dabbled in politics. He had financial reverses, but kept on moving. When business failures practically wiped him out, he started a Bloomington newspaper. His understanding of the relationship of politics and journalism proved particularly fortuitous. It was Fell who “began the detail work of organizing for Lincoln immediately after the defeat for the United States Senate in 1858. He had been secretary of the Republican committee during that 1858 campaign. The first serious, active movement in Mr. Lincoln’s candidacy was this effort of Mr. Fell. A better man for the undertaking there was not in Illinois,” wrote historian William L. King.4 In his fellow Bloomington lawyers, David Davis and Leonard Swett, he had natural allies.

Pennsylvania-born and Ohio-educated, Fell was a close friend of fellow Bloomington resident David Davis. Davis was best man for Fell and Fell turned over his law practice to Davis, with whom Fell had opened a practice again after his business ventures failed. “Fell had more energy and force of character, Davis later declared, than any man he had ever known,” wrote Davis biographer King. “During his long life, Fell founded towns, colleges, newspapers, charitable institutions, and with Davis, had a large part in making Lincoln President.”5

Fell was one of the first persons to push Lincoln to run for President, but Mr. Lincoln was initially reluctant, telling Fell: “Oh, Fell, what’s the use of talking of me for the presidency, whilst we have such men as Seward, Chase, and others, who are so much better known to the people and whose names are so intimately associate with the principles of the Republican party. Everybody knows them; nobody, scarcely, outside of Illinois, knows me. Besides, is it not, as a matter of justice, due to such men, who have carried this movement forward to its present status, in spite of fearful opposition, personal abuse, and hard names? I really think so.”6

Fell argued, however, that William H. Seward and Salmon P. Chase “have rendered too much service, have made long records and said radical things which, however just and true, would seriously damage them, if nominated.” According to Fell, “What the Republican party wants, to insure success in 1860, is a man of popular origin, of acknowledged ability, committed against slavery aggressions, who has no record to defend and no radicalism of an offensive character.”7

But Mr. Lincoln cooperated with Fell to the extent of preparing some biographical notes. Mr. Lincoln wrote a short autobiography Fell. Robert S. Harper wrote in Lincoln and the Press that Fell “often wrote articles for the Pantagraph, his home-town newspaper. He had been in the Eastern states where he was struck by the number of inquiries about Lincoln. He conceived the idea of sending a brief biographical sketch of Lincoln to Eastern editors.8

After the presidential election, Fell was modest in his ambitions for himself and his friends – even David Davis. He was a rare voice of political sanity. Historians Harry J. Carman and Reinhard H. Luthin wrote that “Fell – essentially neutral in the Davis-Judd Republican factional fight in the President-elect’s own state – had suggested to Lincoln that Illinois had her share of glory and patronage in the President; that neither [Norman B.] Judd nor [David] Davis should go into the Cabinet; that Cabinet places should go to Indiana and Pennsylvania, for such a disposition of favors was a good deal spoken of at Chicago, in a quiet way, though of course no improper pledges – so far as I know or believe – were asked – as I am very sure they were not and could not be given.’ Judd’s followers did not surrender easily, but the odds were against them. For Lincoln had almost definitely decided to take Smith. Soon Leonard Swett was writing an associate confidentially: ‘Tell [Caleb] Smith what I know, that it was through the Illinois fight and Judge Davis that Judd went out and he went in.'”9

Just before Mr. Lincoln left for Washington, Fell wrote him: “I would gladly call and bid you good-bye, before you leave, but as I shall not probably see you again soon – but am quite shure [sic] that you will properly appreciate my forbearance in not doing so. I hear from you frequently and it is a source subject of universal rejoicing among your truest friends that you manifest an unshaken firmness in upholding those great principles for the establishment of of which the Republican Party had its being. – Honor and sound policy alike demand such a course. – So on in the direction you have so nobly indicated, and the blessings of untold millions will rest upon you.- May God bless and preserve you”.10

Fell advised President-elect Lincoln in January 1861: “By giving neither [Norman] Judd nor [David] Davis appointments, you [will] not only have a better opportunity to satisfy the claims of other States but you will keep down a vast deal of ill feeling here at home.”11 Fell’s reward for being one of the Lincoln organizers at 1860 Republican National Convention was being named an army paymaster. Apparently, the appointment didn’t happen as quickly as Mr. Lincoln wished. President Lincoln wrote Secretary of War Stanton: “I really wish Jesse W. Fell, of Illinois, to be appointed a Paymaster in the Regular Army, at farthest, as early as the 1st. of July 1862. I wish nothing to interfere with this; and I have so written as much as two months ago, I think.”12 Ironically, Fell received a federal appointment shortly before his friend Davis did.

Fell later wrote Ward Hill Lamon: “If there were any traits of character that Stood out in bold relief, in the person of Mr. Lincoln, it was that of Truth, and Candor. He was utterly incapable of incinerity [sic], or of professing views of this or any other Subjects, he did not entertain.”13 But Fell objected to parts of Lamon’s finished biography. He prevailed upon Lamon to take out a chapter on Mr. Lincoln’s transition to the presidency during late 1860 and early 1861.