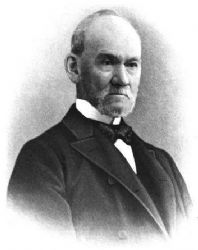 Samuel H. Treat, Jr., was a New York State native who in 1834 immigrated to Springfield, Illinois, where he lived for the rest of his life. In 1839 Treat began his service ed as judge on the Eighth Circuit; he was named to the Illinois Supreme Court a year later. (When Treat was appointed to the bench, he vacated his position as a Springfield trustee – a position to which Lincoln was then appointed.) Treat continued to preside over the Eighth Judicial Circuit until 1848 when David Davis took over – after the law was changed so that State Supreme Court judges no longer presided over district courts.

Treat stayed on the State Supreme Court where he became chief justice and where Lincoln had an active case load. According to historian Daniel Stowell: “Lincoln received requests from attorneys in all parts of the state to argue the appeal of their cases to the Illinois Supreme Court in Springfield. Throughout his career, Lincoln and his successive partners handled more than four hundred cases before the state’s highest court; in nearly half, they had not been involved in the case in the circuit court from which it was appealed.”1

“Judge Treat was honest, and prompt in his decisions, and gave general satisfaction to the bar and to the public. His opinions were brief and clear,” wrote John M. Palmer. “Judge Treat was an able lawyer, and excelled in his appreciation of facts. It was said of him that he could be depended upon to try issues of fact better than the most intelligent jury. He devoted himself exclusively to his judicial duties, neglected his private business, which was found, after his death, to be in great confusion.”2

“He was a sterling Democrat, and as true as steel to that great and noble old party, but he never suffered his politics to mingle in the slightest degree with his judicial opinions or deliberations. He was remarkable for his urbanity and suavity of manners, as well when off as when on the bench. If any person will read the reports of the Supreme Court of Illinois, they will find the opinions of Judge Treat to be the neatest and tersest of them all, and the nicest legal criticism will be unable to detect an error in the points he has made or the reasons he has brought to support them,” recalled lawyer Usher F. Linder. “He was an intimate acquaintance and personal friend of Abraham Lincoln in his life-time, although they differed in politics….He is a quiet, unambitious man, and precisely the kind of timber out of which judges should be made.”3

Treat recalled Lincoln’s first case before the Illinois Supreme Court: “This is the first case I have ever had in this Court, and I have, therefore, examined it with great care. As the Court will percieve [sic] by looking at the abstract of the record, the only question in the case is one of authority. I have not been able to find any authority sustaining my side of the case, but I have found several cases directly in point on the other side. I will now give these cases to the Court, and then submit the case.'”4

In 1855, Illinois was split into two federal judicial districts. Judge Treat was appointed to preside over the southern district court, which met in Springfield. Palmer recalled: “In 1860, after the nomination of Mr. Lincoln for the presidency, a suit was instituted by Hon. David J. Baker, the elder, against the faculty of Shurtleff College. Mr. Lincoln appeared for the plaintiff, and the writer for the defendants. A demurrer was interposed to the declaration. Judge Treat proposed to Mr. Lincoln to take care of his side of the case; the writer argued for the defendants. Judge Treat sustained it, and the declaration was never amended. This was the last case in which Mr. Lincoln ever appeared in court.”5

One morning in the winter of 1858, recalled Lincoln law partner William H. Herndon, Lincoln was particularly despondent over the attitude of eastern Republicans like New York Tribune editor Horace Greeley toward Senator Stephen A. Douglas: “Greeley’s letters were driving the enthusiasm out of him. He seemed unwilling to attend to any business, and finally, just before noon, left the office, going over to the United States Court room to play a game of chess with Judge Treat, and did not return again that day.

Treat, whom Lincoln biographer Jesse W. Weik interviewed in 1883, said that “one morning Lincoln came to his office and joined him in a game of chess. The two were enthusiastic chess-players and when the opportunity offered indulged in the game. On the occasion named they were soon deeply absorbed, nor did they realize how near it was to the noon hour until one of Lincoln’s boys came running in with a message from his mother announcing dinner at the Lincoln home, a few steps away. Lincoln promised to come at once and the boy left; but the game was not entirely out; yet so near the end the players, confident that they would finish in a few moments, lingered a while. Meanwhile almost half an hour had passed. Presently the boy returned with a second and more urgent call for dinner; but so deeply engrossed in the game were the two players they apparently failed to notice his arrival. This was more than the little fellow could stand; so that, angered at their inattention, he moved nearer, lifted his foot, and deliberately kicked board, chessmen, and all into the air. “It was one of the most abrupt, if not brazen, things I ever saw,” said Treat, “but the surprising thing was its effect on Lincoln. Instead of the animated scene between an irate father and an impudent youth which I expected, Mr. Lincoln without a word of reproof calmly arose, took the boy by the hand, and started for dinner. Reaching the door he turned, smiled good-naturedly, and exclaimed,’Well, Judge, I reckon we’ll have to finish this game some other time,’ and passed out. Of course I refrained from any comment,” continued Treat, who, by the way, was old and had never been blessed with a child,” but I can assure you of one thing: if that little rascal had been a boy of mine he never would have applied his boots to another chessboard.”6

Treat gave Lincoln a copy of Joe Miller’s Jests from which Lincoln apparently adapted some of his famous stories. The judge claimed that Lincoln “learned its entire contents, for he found Lincoln narrating the stories contained therein around the circuit, but very much embellished and changed, evidently by Lincoln himself.”7 Treat himself like to listen to storytelling marathons by fellow attorneys. Herndon recalled: “I have seen Judge Treat, who was the very impersonation of gravity itself, sit up till the last and laugh until, as he often expressed it, ‘he almost shook his ribs loose.'”8

In the fall of 1862, Treat passed on some military advice regarding the Mississippi River to President Lincoln through his successor on the Eighth Judicial Circuit, David Davis. Lincoln replied: “Your very patriotic and judicious letter, addressed to Judge Davis, in relation to the Mississippi, has been left with me by him for perusal. You do not estimate the value of the object you press, more highly than it is estimated here. It is now the object of particular attention. It has not been neglected, as you seem to think, because the West was divided into different military Departments. The cause is much deeper. The country will not allow us to send our whole Western force down the Mississippi, while the enemy sacks Louisville and Cincinnati. Possibly it would be better if the country would allow this, but it will not. I confidently believed, last September that we could end the war by allowing the enemy to go to Harrisburg and Philadelphia, only that we could not keep down mutiny, and utter demoralization among the Pennsylvanians. And this, though very unhandy sometimes, is not at all strange. I presume if an army was starting to-day for New-Orleans, and you confidently believed that St. Louis would be sacked in consequence, you would be in favor of stopping such army. We are compelled to watch all these things.”9